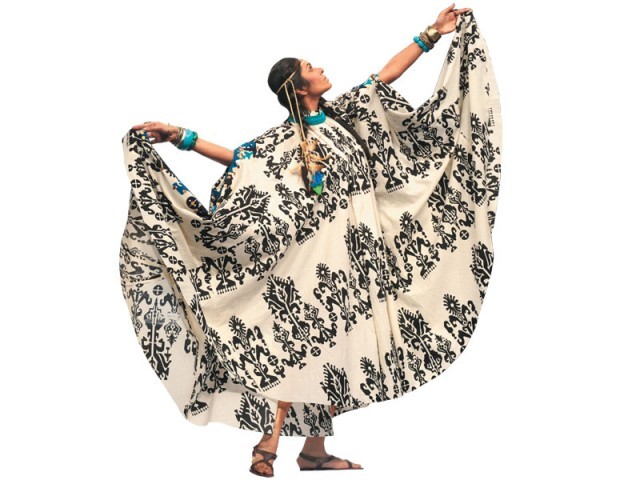 Pakistan Fashion Week opens with a burst of cuts, colours and a tinge of predictability.

Akif Mahmood gained acclaim for bringing folk heritage onto the ramp and in the three seasons that he has shown so far, he stays true to that passion of creating themed collections focused on Pakistan’s cultural roots.  From a debut with his Kailash collection, Mahmood now took us to the famed rooftops in Lahore where kite festivals are held annually to commemorate the coming of spring. Haveli and kite motifs dominated a rather predictable collection of trench coats and open sherwani cover ups. It’s all well to work with themes, but it’s time Mahmood moved beyond and demonstrated some dexterity with his cuts and silhouettes to quench our doubts that he just might be a one-hit wonder.

Debutante Zonia Anwaar, a recipient of the Lux Style Awards (LSA) academic scholarship, showcased a collection that played on waves and structured ruffles in shades of aqua and purple. A tad bit monotonous and ill-fitted, with the focus on detailing being the mushrooming troughs and crests, the showcase did not reveal the designer streak Anwaar is expected to display.

Neo Natives
Maria B’s Pocahontas-inspired collection of flared bottoms, jumpsuits and bubble tops — in asymmetrical cuts in colour blocks of earthy tones, scarlets and blues — was definitely her most pret-satisfying offering to date. The prints drew motifs from ancient cultures, from the Aztec to Persia, to lend the collection a cosmopolitan feel. Replete with hemp shoes and bags, the collection was a shout-out to the 1970s, with the sleek groovy look of long hair and braided headbands that was fun, supremely comfortable and ‘campus’ cool. This was a collection that will certainly heat up college grounds this summer.

Zaheer Abbas stayed true to his Issey Miyake-esque pleating aesthetic, which delved into elegant Grecian togas that sashayed on the catwalk with fragility. It was an immaculate collection with minimal details (dabka this time around, instead of the tiny bells that Abbas used previously) in a colour palette ranging from cream to burnt orange.

Hoodies, boxed broad ensembles and futuristic pieces characterised the students’ show, just like it does each year at the PIFD graduation. As always, the accessories made more of a mark than the clothes themselves, which lacked the structure and seamless fit that one expects from a designer. Yet as expected, it was the most vibrant show of the day with creative choreography (models were seen parading as puppets) and styling.

Foliaceous
Nida Azwer did jungle fever with a twist. Instead of a call to the animal kingdom, this was a call to the jungle itself — to the barks and foliage, whose textures she explored with cut-out fabric juxtaposed with flowy silk, leafy screen prints. Azwer used her signature gold embossing and her typical broad borders on the angharkhas, which she brought back in vogue from her very first showing.  Overall, the designer’s collection was very safe and commercial, and is more fit for the racks than the ramp.