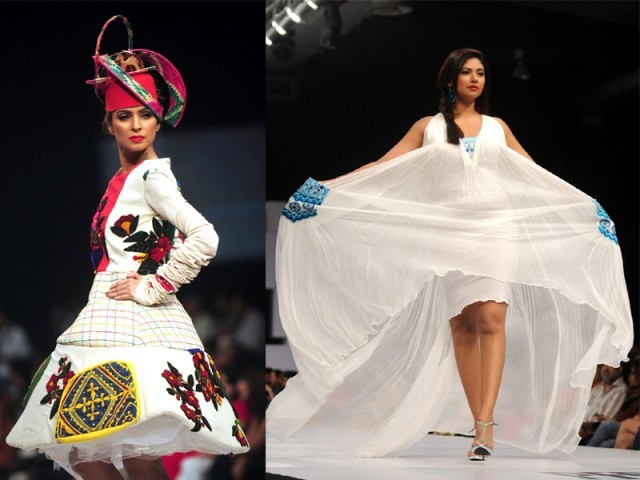 After a beautiful traditional showcase at the previous fashion week, Nikki Nina’s aquatic collection nosedived this time around. Poorly structured, ill-fitted and carrying large ungainly stains, the collection was a sad testimony to the fact that the duo needs to get their creative apprentice Mohsin Ali back. Screen prints depicting life underwater was too literal an interpretation of the marine theme and sheer tops worn over tank tops and short shift dresses serenading as kameezes with slits over miniskirts, made for a haphazard presentation. They did, however, bring hemlines to a medium length, so kudos for that. Yet, the fact that the duo didn’t adorn their own collection for the finale walk was hint enough that they too felt this was a showcase that was just not good enough.

There was a pungent stench of deja vu emanating from Zainab Sajid’s collection that was reminiscent of Zaheer Abbas’s techniques of pleating and drapes with an addition of hefty tassles, and Nida Azwer’s civilisation collection with her use of Hala pottery motifs. It was laudable that she experimented towards pret given her a strong focus on bridals and although this is a start, one had hoped that she would have been more innovative and improved on her choice of fabric.

A talent that never disappoints, Mohsin Ali’s show made a social comment with a symbolic opening of models drenched in black, making way for a lone, white-clad figure to signify hope emerging from a thick crowd of despondency. Although part of the collection was devoted to depicting darker times, the black in his ensembles coalesced merrily with bursts of colour in tie-dye and screen prints for a unique amalgamation. This had to be Ali’s most commercial collection, which he created deftly without losing his signature desi kitsch. Steering away from subaltern fabrics, Ali played with hynotising stripes in colour blocks and used taweez lockets as accents for a brilliantly constructed awami collection.

FnkAsia takes off from their wonderfully crafted ‘Sea Merchants’ collection to create a brooding winter look with their latest offering, Suzani. Although it is the season appropriate to be presenting a winter line, the fact that the fashion week was largely fixated on Spring/Summer, made Fnk Asia’s collection feel out of place. Also, while the basic motifs and general theme stays the same, Huma Adnan makes a sincere effort to create an array of statement jackets in velvet and linen for the winter. While the overall effect of Suzani wasn’t as fun and striking as her previous showcase, Adnan’s attention to detail in styling with complementary accessories like necklaces used as head bands and elf-like shoes made for an interesting presentation.

In her first solo exhibit, Sania Maskatiya showed her true mettle as a designer, who is urbane and classy and knows how to dress the modern Pakistani woman. Sleek and pristine in her cuts, much like Lahore’s Sara Shahid, Maskatiya proved, in this collection of block prints, balloon dresses, jumpsuits and round-hemmed chic kameezes, that she knows how to make women of her generation swoon. Impeccable draping and immaculately crafted silhouettes, with just the right amount of detailing using copper coins, Maskatiya proved that she knew where to show restrain and where to create effect.

Newbie Irfan Ali’s 3D construction of a vibrant technicolour rural Punjab on fabric made for a fine debut if only it wasn’t so much like Mohsin Ali’s interpretation of the same theme. The 3D pockets with Rilli and blossom motifs looked too familiar in their use on Ali’s fanciful dresses, but when the same patterns were used on kimono-esque kaftans and kurtas, Ali managed to make them his own. One would like to see how this young scion manages to take a new dimension on rural heritage and how far he takes flight in the fashion scene.