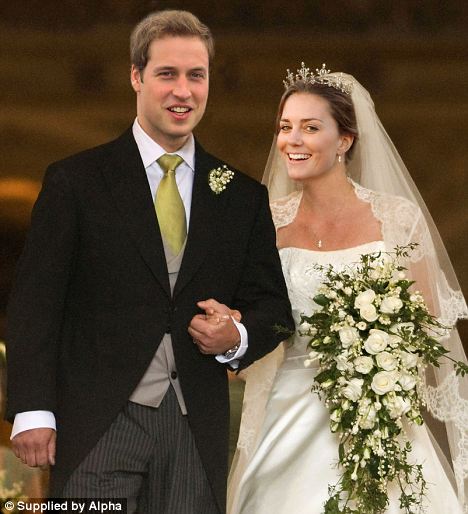 She will walk down the aisle a commoner but walk out a princess. Kate Middleton and Britain’s Prince William will today exchange wedding vows in the historic Westminster Abbey under the avid gaze of world political leaders, royalty and two billion television viewers.

After the service, five carriages drawn by the Household Cavalry mounted troops will carry the newlyweds from Westminster Abbey to Buckingham Palace – a journey that will take about 15 minutes to complete. An additional half a million people will line up on the road leading to Buckingham Palace.

Crowds began to gather in central London from early morning and thousands camped over night to grab the best location to see the royal couple – an event that takes many back 30 years to when William’s parents, Prince Charles and the late Diana, got married.

The bridegroom will cut a dashing figure in a red tunic of an Irish Guards colonel – his most senior honorary appointment. The bride’s dress is a closely-guarded secret, with speculation that it will have a long train. BBC quoted the Met Office as saying that the day will start off dry but cloudy in London but there is a risk of heavy showers developing later on. The royal wedding will be a grand affair with 1,900 guests, including some 50 foreign heads of state.

The Foreign Office, however, announced the last-minute withdrawal of the Syrian ambassador’s invitation amid criticism of the violent crackdown on pro-democracy protests. The marriage will be a culmination of eight long and sometimes lonely years of waiting for Kate.

Daily Mail said that couple’s modern relationship has seen them living together before marriage, an unthinkable arrangement even a couple of decades ago. Also, unlike the Queen, who promised to obey Prince Philip when they married in 1947, Kate will today pledge only to ‘love, comfort, honor and keep’. Just a day before Thursday evening, Will spent time with the Prince of Wales, Duchess of Cornwall and Prince Harry. He also did a walkabout in which he met eager onlookers and joked, “All I’ve got to do is get my lines right.”

Kate at that time was with her family at Goring Hotel, in Belgravia, a short distance from Westminster Abbey.

As soon as the marriage is over, Britain is set to witness a mass celebration with over 5,000 street parties, including one hosted by Prime Minister David Cameron at Downing Street.

The Prince of Wales and the Duchess of Cornwall, Prince Harry, Kate’s parents – Carole and Michael Middleton – her sister Pippa and her brother James will all act as witnesses and sign the marriage registers.