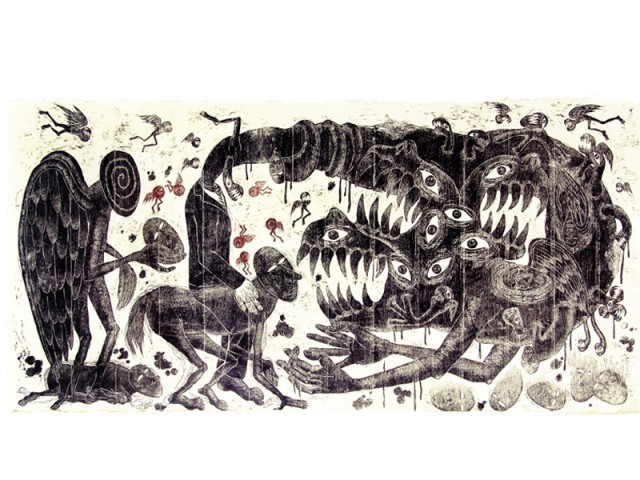 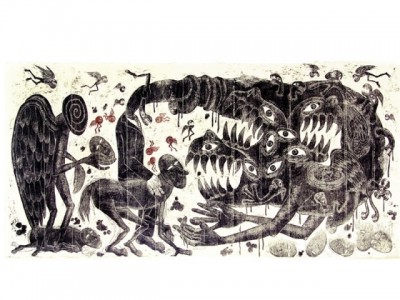 Among the many themes to ponder at the Believer’s Paradise exhibition that has opened at Koel Gallery is the developing relation of the self to its surrounding, which in many cases can be a contemporary Hell.

For the show, curator Syed Faraz Ali brought together the works of three Thai artists: Panuwat Sitheechoke, Kriangkrai Konghanun and Arthit Amornchorn. But be prepared because Sitheechoke and Konghanun’s will be disturbingly familiar as they have dredged up the darkness of the human soul.

Delicately etched but faceless heads run throughout Sitheechoke’s frightening work that has lashings of harsh charcoal strokes. This clever technique creates a sensation of morbid, maddened and out of control frenzy. “[Sitheechoke’s] work focuses on people moving to a big city in search of work and how they feel,” explained Konghanun, who flew in to Karachi for the opening on Thursday. “You know when you’re surrounded by a lot of people and still feel lonely?”

Women’s bodies are tattooed with hollow faces that become symbolic of oppression. “I tried to articulate an art concept explaining the structural relationship between human beings and society,” said the artist in his statement.

Konghanun, who prefers to be called by his nickname Tum, explained that in his work, he has taken on an absurdist twist on Theravada Buddism, in which spiritual practice aims at breaking away from Samsara or the endless cycles of Life and Death. His works are aggressive engagements of how we understand ourselves. “My art is based on the dark side of human nature,” he told The Express Tribune. “The Spiritual Disease focuses on a contemporary hell.” Tum’s colour of choice is black and white as they are the colour of nightmares, and indeed, the figures in his work have become the nightmare themselves. “Nothing can be controlled in a nightmare,” he explained. “Lust, anger and evil thoughts take over completely.” His hollow faces are a commentary on how human beings have lost themselves.

At the other end of the spectrum – at least the colour one – is the work of Amornchorn, who like Sitheechoke was not at the opening. “His work is based on his childhood,” said Tum. “His father used to make toys out of household items such as boxes, lamps and fruit. By using those personal memories he has made his art interesting and unusual.” By simply etching and collographing on bright colours such as green and orange on woodblock, Amornchorn has easily made his work happy and quirky. An onion clock, a flowerpot plane hover in mid-air. They are Daliesque objects minus the nightmare. “For me, the memories and experiences I have shared with each object throughout my life has constructed a priceless sentimental value that outweighs the economic price,” the artist said in his statement. “Every single object in my work represents the retrospective happiness I have embraced.”

The exhibition opened at the gallery on August 4 and will continue till August 20.