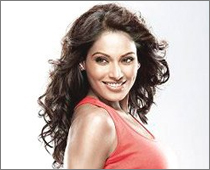 In the film Aa Dekhen Zara, Bipasha Basu might be having sizzling appearances in a discotheque with Neil Nitin Mukesh. But that’s reel life.

In real life Bipasha doesn’t go to late night discos and dancing parties. Do you know why? This is one of the sacrifices that this sexy siren has made for her beau John Abraham.

Talking about her real life experience of attending discos, Bips says, “I used to go to late night parties and clubs earlier but now I don’t have time for all that. In fact John didn’t like it. He used to accompany me every time I went to such parties. Not just that he even used to keep a watch on me while I was on the dance floor. In fact when you are on the floor, there are lots of people who just try to come close to dance with even if you don’t want. Quite often they misbehave. It’s a place where people drink and dance. So there are possibilities of such things which may annoy you.”

“If somebody came closer to me, John used to immediately come down on the floor and become a kind of protective wall for me. He used to be shielding me every time anything of this kind happened. I enjoyed my parties for a while but later on I realised that John didn’t like it. So I stopped doing that. Since than it has been a long time that I went for any dance party,” added Bipasha.

Due to her hectic shooting schedules, even if she wants to attend a club, she can’t do it because she doesn’t have time for it.