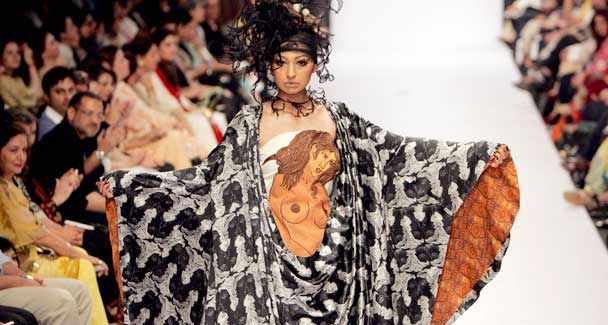 This September the frenzy of excitement amongst designers was hard to hold down. The latest issue of American Vogue had hit the stands, featuring two-pages on Fashion Pakistan Week 2, and understandably not a single copy was left unturned (read unsold).

Any fashion follower would know the value of Vogue coverage; fashion fortunes have been made by a mere mention in its sacred pages. And while this coverage did not entirely look at Pakistani fashion’s most glamorous angle — inevitably bringing in the Taliban — it did suggest that Pakistan has another, more liberal angle than what the world is used to seeing. Carla Power, the writer who specialises in the study of Muslim societies, suggested as much with sensitivity and admiration in her coverage of FPW2.

International interest at the helm of so many fashion weeks — in Karachi and Lahore — has most certainly given Pakistani fashion a much-needed boost. Designers have been written about in prestigious publications, they have spoken on TV channels and they have been invited to participate in numerous fashion shows across the globe. But what is to happen now that the initial excitement is dying out? The year Pakistan had three major fashion weeks cannot be celebrated and packed away in the same breath.

There needs to be a system to ensure that the industry continues building, brick by brick. Designers have basked in the spotlight, they have after-partied and they have brushed shoulders with international media. But almost one year into Pakistan’s affair with fashion weeks, where exactly does the fashion industry stand and how closer is it to being on a par with its global counterparts? Is there really so much to rejoice? One would have to say, not yet.

The British Fashion Council (BFC) on its website states that “London Fashion Week puts London and British Fashion firmly on the global stage, generating orders in the region of £100m; the event itself contributes £20 million to the London economy in terms of direct spend.” Can the two local councils please provide similar figures for Pakistan?

The BFC takes transparency a step further by publishing an extensive Value of Fashion report on the British fashion industry’s direct contribution to the economy. Pakistan’s fashion industry needs to understand that in this day and age, economic value is the only thing that can make it sustainable.

It also needs to be consistent not sporadic, at the fashion week as well as the fashion designer level. International fashion weeks usually recur every six months but neither council in Pakistan has been able to show this commitment. The PFDC just recently announced a one-month postponement of the PFDC-Sunsilk Fashion Week, stretching the gap to 10 months.