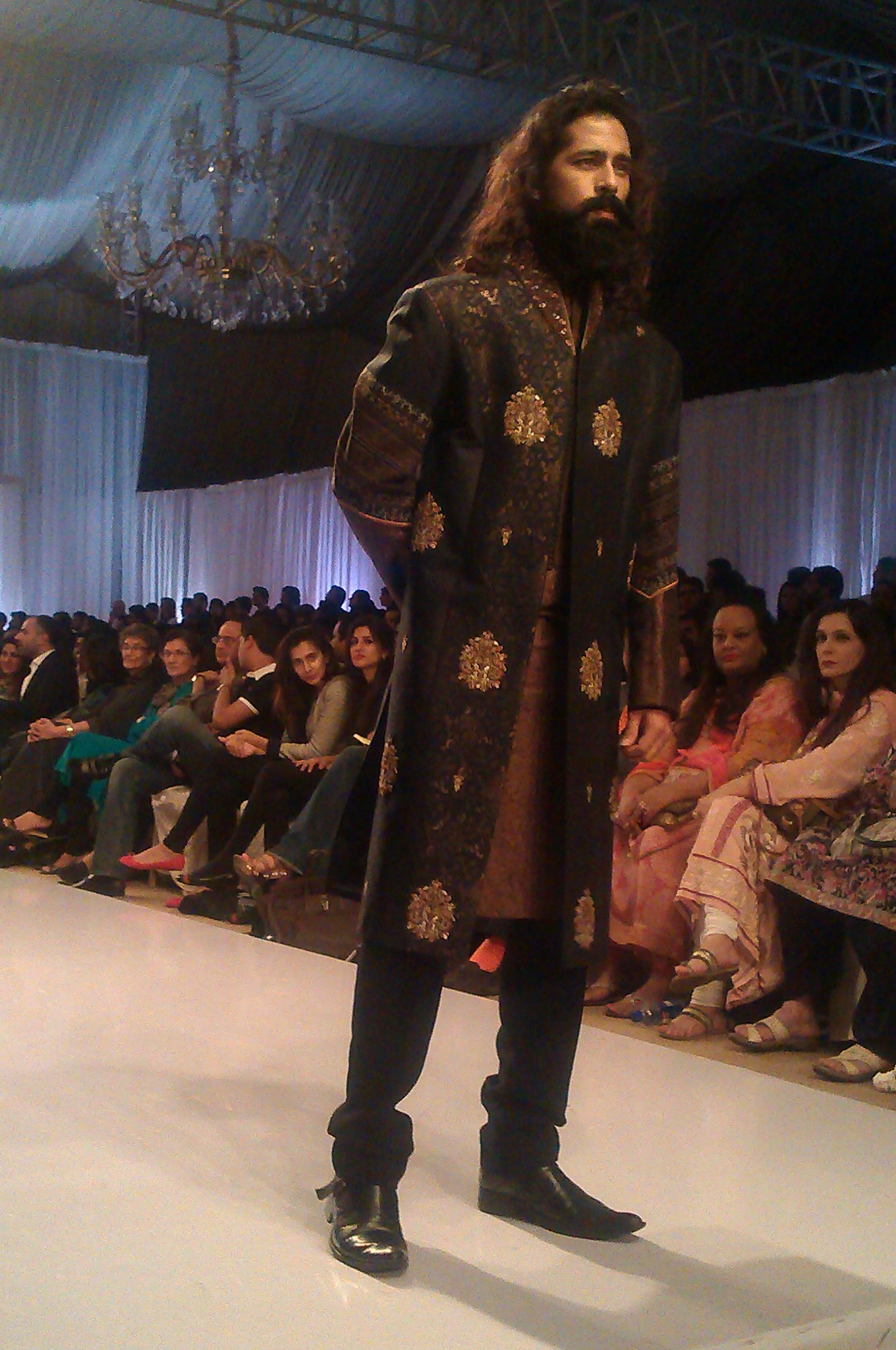 Well, not much of a surprise that Day 3 is the Finale of FPW4 fall/winter 2012. One wonders if it is a ‘week’ why would it ends on day 3? Probably because of coming Eid vacations and the earlier shifts of date from 17th to 21st October. Anyways, FPW4 in all 3 days successfully showcase 20+ designer’s creations while injecting some new talent to the older lot of designers.

It will be nice to see female models bringing sizzle & energy to the ramp according the mood of the collection they are showcasing (like Iraj can really uplift any kind of collection with her appearance while Fayeza Ansari & Ayaan are always with same expressions). Like most of the models didn’t even bother to smile on the ramp while male models are always in a hurry to run on ramp. And please those bearded and long fizzy haired male models are not appealing to the eyes at all.

Front row seats were reserved for social media but with every passing minute they keep squeezing & squeezing, making it a tiring job to even use the laptop for live coverage of event. Photographers were given chairs but they were so many that half of them were still on the floor, few inches away from the end of the ramp (& yes they keep on arguing with each other for space). In all this hustle & bustle the show started very late. The hall was jam packed with literally no space to move except ramp.

Delphi presented the collection titled “Pythia” named after the priestess of Apollo. Delphi is the only brand in Pakistan to have hand woven silk crochet as the core of their designs. I never imagined crochet as glamorous as Delphi presented it in tunics, cocktail dresses (some were really not working though) and sarees fusing with pearls & silks. The Sarees were to die for, literally. The Crochet border was so intricate and glam that you wish to own one. Overall, it is a very different kind of collection that you have never seen before. (By the way the silver Pebble shaped Almond candies as give away in a traditional net potli were WOW too)

Emran Rajput presented his men’s wear collection consisting of awkward to the eyes vibrant jackets with pleats. The color combinations like blue with green and purple with yellow were too funky or bold. The collection was like a fruit candy.

Syed Rizwanullah’s dark, Gothic (should I say Dracula look inspired) collection was received very well as his comeback. Models supported a look with half lips painted black, kind of distracting but complementing the theme of collection. Some pieces were impressive worn by Fayeza Ansari and Iraj. MTV VJ Waqar Ali Khan walks the ramp too. In the end that Lip lock between Fayeza and Rizwanullah was unnecessarily awkward like those too tight to hide pants.