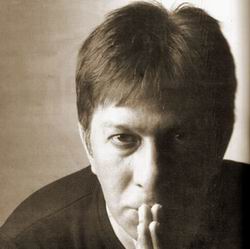 It’s been 25 years since the fashion industry was first introduced to the phenomenon known as Imran Qureshi. To mark this turning point, we decided to give a bit of a twist to the obligatory interview: we had Imran interviewed by his own choice of journalist. That might not be how most people know famous fashion designer Rizwan Beyg as, but he was in actuality the perfect choice. Not only has he been a much-admired columnist of an English weekly, but he also happens to be great friends with our anniversary boy, and that is how an otherwise straightforward interview turned into a friendly chitchat session.

He sits at the table with his soft brown eyes and floppy hair and I look carefully for gray but there is none. He claims to be 47 but the face and slight build belie his claim. 25 years later Imran Qureshi is still very much a force to contend with and as the founding father of choreography in Pakistan is very much a part of the who’s who in fashion.more A silver Jubilee is reason enough to celebrate so I sit and grill him on his past. I have known Imran for 15 years because that is how long I have been in the fashion industry bit it’s only recently that Imran and I have come to be friends so we chat as friends do, not as interviewer and interviewee.

I know of his illustrious family….. all of old Karachi does. His father the famous decorated RAF pilot Sattoo Qureshi who was much loved by everyone, and his aristocratic mother from Makhad near Attock who lived quietly in his fathers shadow were very much part of the 60s Karachi “scene”. The columnist Omar Qureshi is his chacha and Hanif Qureshi the famous author of My Beautiful Laundrette, is his cousin not to mention the first fashion consultant Bilquis Nasurallah who is his phuppi. So its no wonder Imran turned out to be a fashionista.

Growing up between the Sindh club and Boat club members seems to have given Imran a voracious appetite for dancing and he grins and says “I loved to dance… My earliest memory is dancing and going to the killub”. I have visions of a wide eyed 6 year old wandering through the swinging sixties. The begums with their chandelier earrings and hipster sarees with teased bouffants and thick liner, powder blue eyes shadow and frosty lips seems to have had a deep effect on him and his knowledge of Pakistani and Indian cinema is mind boggling. We talk of Rozina and Rani of Waheed Murad and Nisho and obscure films that he swears I MUST see. Zarqa seems to be one of his favourites and he giggles at the performances of nasira and Neelo but is quick to praise the films-unerring eye for detail. What do engineering and fashion have in common. I ask him… I know he has a degree in chemical engineering and here he is painting sarees and doing shows of stained glass collections. Not to mention an acting stint in series and drama on stage as well as teaching dance at the PACC. ‘I was a tour guide for the PTDC” he laughs “ and I also taught French”. I remember seeing him choreographing a dance number in a film and his knowledge of Pakistani cinema has made him a valuable contributor to the Tribute shows in the electronic media. The NAFDEC film and Kodak award show that were done well before the concept of award shows were popular goes a long way towards proving his far sightedness and creativity.

So where did it all begin and where will it all end? “I started early” he confesses “spending a year in Paris was a dream and since we had franchises for several designer perfumes it gave me access to a lot of fashion houses.’ “Assisting as a volunteer behind the scenes at shows became an obsession and watching French couture made me determined to do some thing in fashion. I came back filled with visions of doing things in Pakistan but there was not much happening here”.

Determined to put his newfound experiences to use Imran and a few friends put together a show” We wore our own clothes and paraded around on the stage to a wide eyed audience who had never seen a fashion show. It was totally amateurish but a lot of fun” he smiles reminiscing at the thought. This was just the beginning. The show brought offers and what started out as an amateur event soon became his calling card. The earlier shows were done free of charge and since Imran had a degree in Engineering and was busy working for his fathers nasgas company there was no concept of getting paid. “Massarat Misbah was the first person to ask me to do a show and offered to pay me much to my amazement “ he says. What started off as a professional commitment has blossomed into a deep friendship and long term working relationship.” Fashion was no where near what it is now. There were a handful of designers and show was mostly done with friends and family members roped in. Today fashion has become a business. Shows are used as entertainment and fashion is used to sell everything from packaged meat to soft drinks”. Models are better now? I ask him. “Its all so different” he smiles. “There was no criteria for models when I started, simply because modeling was not a profession nice girls took up seriously.. You modeled because you were liberal and were friends with the choreographer. Some where in between there was the emergence of the boutique culture and then it was followed by designers. Nowadays modeling is a full time profession, maybe too professional.

“There is this pack like attitude in the fashion industry with certain people working with their friends and it never used to be like that “he claims” there was a respect and a regard in the early days and a “ lihaaz” that is missing in the world today”. I quiz him on the offers he has and how things are different.” Fashion is viewed as entertainment unfortunately. There is no concept of a catwalk presentation showcasing a designers collection like it is done in the fashion capitals of the world” he comments. “ Every one talks about a THEME and as a result the shows get ripped apart by the fashion press. No one seems to realize that a show is as good as the designer it showcases. The tendency here is to use several junior designers to put together a variety program on fashion and the result is a mismatch with no cohesive design philosophy coming through. This unfortunately results in bad reviews and it’s the choreographer/event coordinator that suffers.”I ask him why he doesn’t use established names and he grins wickedly” You guys are great designers but every good designer wants to do a solo show, no top designer wants to show unless the catwalk is being shared with a comparable rival of the same caliber. Most sponsors are not interested in quality unfortunately. All choreographers end up catering to sponsors and work within their limitations be it creativity or budgets. Its frustrating”. This is not to say that Imran has not worked with top designers and stylists. His Kolachi to Karachi, for the Pakistan Navy was a milestone of sorts and has since spawned a series of rip offs and was his first show with Nabila. Tariq Amin was also the stylist for the Mercedes launch where Nilofer Shahid, Sonya Batla and Deepak Perwani did a collaborative showing in Islamabad at the German Embassy followed by a Rizwan Beyg show at the same venue.. The list is endless… PREGMEA has used Imran repeatedly for their shows for the past 5 years and his vast knowledge of film has made him a popular choice for the Tribute shows Indus has been doing on various Pakistani and Indian artistes. On the International front Imran has been doing shows for the EPB in Cologne for Interjeans and APNA both in Washington and events on his resume. Dubai Tashkent and Samark and have also been destinations and the Sheraton has recently used Imran for their annual Art fest. Nestle has given him and award and there are certificates and letters of appreciations neatly framed lining his studio walls.

Then there is the Who’s Who of fashion and Imran seem to have everyone on his list. The old school lot has Nilofer Shahid, Amir Adnan, Shamaeel, Sonia Batla, Amin Gulgee, and Farida Qureishi. The new lot includes Nomi Ansari, Deepak Perwani, Aijaaz, Usman Dittu, Khaddi and Cotton and Cotton. His association with stylists also extends across Lahore and Islamabad. Ather Shehzad, Shaheen, Shamain, Tariz Amin et al. I ask him about his friends in the fashion Industry and he speaks affectionately of Tapu Javeri, Saqib Malik and Umar Sayeed. Tani from Depilex seems to have a special in his heart and he has a long-standing friendship and deep affection for her. The conversation turns to journalists and fashion and show reviews. We have talked about the press heatedly and our views are similar. “There are these 20 something employed by reputable newspapers who write critically about fashions and have no idea what they are writing about. The difference should be between reporting and reviewing. Only some one who is an authority on fashion should only stick to reporting the event the way it happened.” I totally agree. I watch him carefully as he talks animatedly about his life and realize here is a man with a rich history of experiences and an excellent family background. In all my years in fashion there is next to no one I know who has ever been vicious about Imran and I realize that he is one of the few people in the business that is genuinely respected and liked by almost all baring a few exceptions. This is unusual in an industry known for its vicious backbiting and brick batting. I realize Imran has many qualities. He is humble, compassionate, affectionate and deeply committed to his work, has a fabulous sense of humor, full of life and a dedicated family member. He also is great friend and is known to go out of his way to oblige strangers. His list of accomplishments and dedicated circle of friends from all strata of society as well as his contribution to fashion in Pakistan is proof of his great love for his profession and people. 25 years later Imran is still going strong. His love for fashion is evident in his painstakingly hand painted sarees and meticulously rehearsed fashion shows. The way things are going it seems like designers may come and models may go but Imran will go on forever.