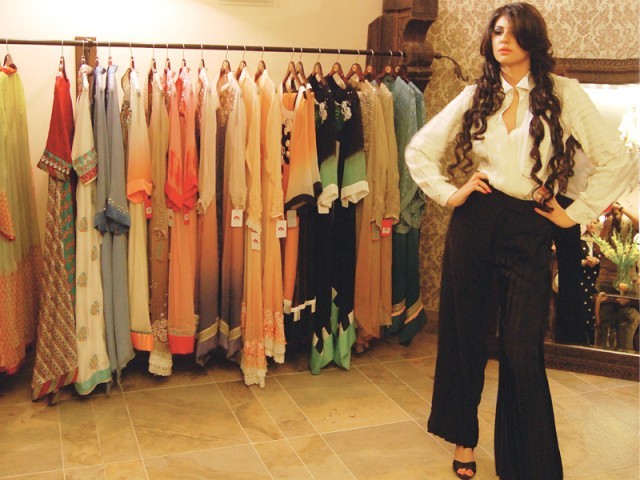 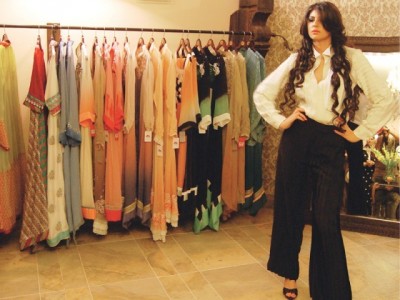 The young Lahore-based designer — also the driving force behind Lahore’s Design Emporium fashion outlet — is known for his experimental renderings and avante gaurde looks. This is his first launch at newcomer ModeVille, which has been progressively raising its profile.

The scope of his range is evident in the sharply contrasting collections with “Jungle Safari” focusing on outlandish chic, tribal and animal prints and “Corporate Resort” displaying an array of shirts and pleated tops that can be worn both formally and casually.
On “Jungle Safari”, Belal commented, “I was inspired by the movie Out of Africa, the one with Meryl Streep.”

The Cream Safari YSL Shirt (priced at Rs8,385) and Tribal Poncho Cheetah Print Dress (Rs18,850) were particular standouts from the line. Compared to other ModeVille designers including Malaika Khan (Rs20,000 and up) and Sadia Mirza (Rs30,000 and up), Belal’s work is relatively affordable.

Meanwhile, the pink-and-white checkered Preppy Shirt Tunic (Rs6,435) is a hallmark of the”Corporate Resort” collection as it is versatile enough to be worn practically anywhere. Anam, a recent fashion week discovery, modeled in a pleated white shirt and similarly pleated black trousers from the line. The look imbibed a sense of corporate masculinity and smart gender bending.
“It’s androgyny for the power woman,” said Belal, interested in subversive and transgress fashion. “I’ve used lots of chiffon but with a men’s approach,” he added.

Still, given the limited rack space and an underwhelming number of clothes displayed, potential buyers and guests were left wanting more. However, there is a reason for the conservative display. “He’s only showing a few pieces because he wants to first test the waters in Islamabad before committing,” explained Arsalan Ahmed Khan,

ModeVille’s resident PR in-charge. He also mentioned that Belal plans on launching a branch of the Design Emporium at ModeVille within the year as he forays into the tricky and extremely selective Islamabad market.

Belal has his own reasons for the way he structured the exhibition: “I’m going to be honest with you. What we usually show on the ramps is really eccentric and experimental stuff, catered for sale in Dubai and New York.” So all the items displayed at ModeVille belong to Belal’s new strategy, which he calls “diffusion”. He has diffused and slightly changed his designs to make them more accessible to a chiefly Pakistani clientele.