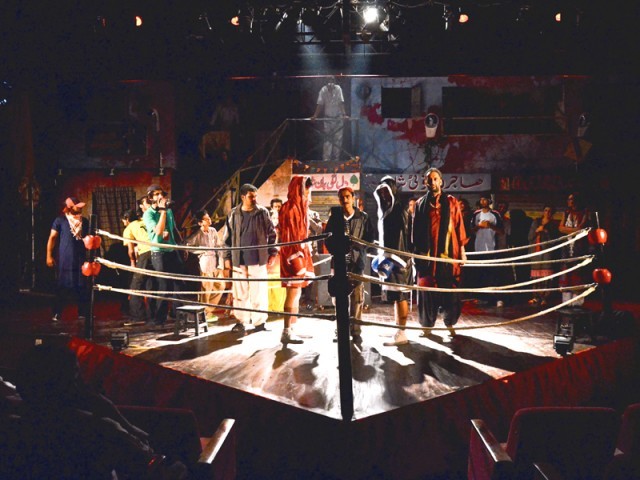 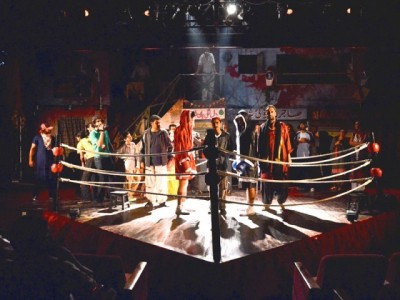 With tickets selling like hot cakes, “Karachi: The Musical” is still going strong. Made For Stage Productions’ first original venture was showcased to the media on October 24 where the audience witnessed something ‘real’; something they could relate to the city where they reside.

No matter how superficial the image of Lyari is portrayed, the play made the audience proud because it was something original, lively and entertaining, if not flawless.

“Karachi: The Musical” is a story about a renowned boxing coach ‘Ghulam’ (Faraz Lodhi) who quits coaching after his boxer ‘Clement’ was shot dead by Daud Islam (Adnan Jaffar), a mafia don, for winning a boxing match. The plot jumps 20 years ahead and Saif Salam (Imam Syed) — an under-19 boxing champion from Multan — travels to Lyari’s district three to seek training from ‘Ghulam’. The story revolves around Salam and Ghulam’s struggle to win the final match against villain Islam’s fighter, a revenge for the residents of district three.

This time around, Nida Butt directs a production quite different from her previous ventures and succeeds in accomplishing her task. Taking a bird’s-eye view of the two-and-a-half hour musical, it was replete with entertaining action and dance sequences, whereas it seemed the script existed for the sake of having a script. In spite of some smart puns like “Defence ki larkiyan or Lyari k gunday bilkul aik jaise dikhte hain,” a room for improvement was required in the overall structure of the script. As the saying goes, “a good script can save a bad director, but a bad script will always sink a good director”, in this case, the play doesn’t actually sink because it is supported by some amazing live music. Music, which reminds the audience that they are in a theatre hall to witness a play about boxing so they better be on their feet.

Musicals which are produced in Pakistan usually incorporate songs just for the purpose of calling them musicals but they actually don’t add anything to the narrative.

Although it seemed forced at times, the music plays a pivotal role in taking a storyline forward. Songs like “Karachi” and “Ek Sae Dus” were hugely appreciated by the audience as the jazz-pop feel of the music and punchy lyrics said a lot about the city itself.

On the other hand, actors, especially those who’ve been involved with theatre for quite some time, seemed a little uncomfortable with the microphones. Had the dialogues (not the songs) been delivered without microphones, the play would have been more raw and appealing, like theatre should be. However, Raza Shah who played the Orangi boxer ‘Raza Baloch’ stole the show with his onstage antics accompanied by the confident child star Aryaan who played the mischievous ‘KK’. However, Lodhi wasn’t able to do justice to his character ‘Ghulam’, who was meant to be the most resilient, but portrayed as rather dumb. Rubya Chaudhry looked stunning in her role as a reporter, but her singing left a lot to be said.

From a technical point of view, the set and the stage space was utilised wonderfully, especially in the dancing scene that takes place as part of Saif’s training with a mix of hip-hop and break dancing. However one felt that the lighting could have been 10-fold better.

Overall, the play might seem a little under-directed at places but as a whole, it is an original piece of Pakistani art with exceptional music. The play runs till November 13 at the Arts Council and is definitely worth the experience.