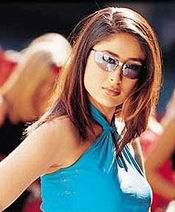 Bollywood super star Kareena Kapoor has send a legal notice to Mid-Day that published photos of her passionately kissing her boy friend and co-star Shahid Kapoor in a restaurant RAIN.

On Thursday some TV channels aired the entire clip taken by some video enabled cell phone.

Aakar Patel, editor Mid-Day said that we have received a legal notice from Kareena where she has said that Mid-Day has doctored those pictures of her kissing Shahid.

“We haven’t doctored any picture. We have even got the video clippings to show that. We will carry our reply in the newspaper Thursday.”

Kareena claimed Rs.200 million as damages from the newspaper.