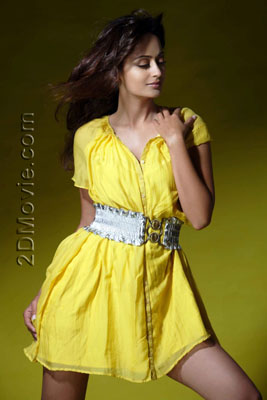 Hijack actress Kaveri Jha is all set to hijack cinema screens in the coming months with about three releases almost back-to-back. She is touted as the next big thing to hit Bollywood after Deepika Padukone made waves last year with Om Shanti Om. Kaveri was seen in Hijack opposite Shiney Ahuja though the film didn’t do too well at the box office.

Kaveri is now doing about five films in the south. Ooha Chitram, directed by Satya and produced by K Paidbabu under the Likhit Arts Banner is almost complete. The songs are expected to be completed by December and the producers expect to release the film by end January 2009. The music for this film has been composed by Siva R Nandigama.

Naa Girl Friend Baaga Rich, which is directed by M Nagendra Kumar and produced by the Kumar Brothers stars Sivaji and Kaveri Jha in the lead roles. This film is also expected to release in end December or January of next year. This is Kaveri Jha’s second Telugu movie after the release of Jagapathi Babu’s Nagaram.

Then there is the Priyadarshan directed Bum Bum Bole which is an adaptation of the hit Iranian film Children of Heaven and has Darsheel Jaffery in the lead. The film also stars Atul Kulkarni who will play Darsheel’s father and Rituparna Sengupta, who will play his mother. Kaveri has been signed to play the role of Atul’s sister.

According to her publicist Flynn Remedios, Kaveri has also signed on a few big banner mainline Bollywood films. “She is currently shooting in Hyderabad, but you can expect some big announcements when she is back in a couple of weeks,” he said.