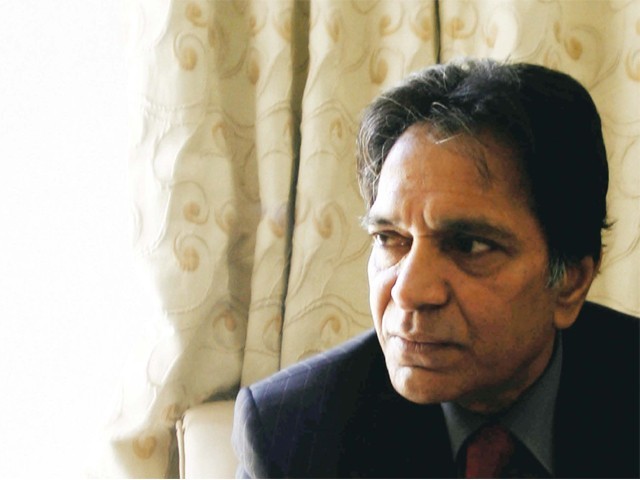 In last one month Pakistan has lost its several Big Actors and Comedians like Babu Baral, Liaquat Soldier and Mastana and latest shocking news is that legendary Actor, Iconic compere  and a great entertainer  Moin Akhtar has also died due to heart attack .  He was a comedian par excellence, but his last act left an entire nation in tears. He was 60. He is survived by his wife, two daughters and three sons.

Born in 1950, Moin Akhtar joined show business in the ’60s as a comedian. His remarkable impersonations and rib-tickling skits earned him recognition in no time. But it was in the ’70s that Moin Akhtar’s appearance on the Zia Mohyeddin Show as a standup act catapulted him to national fame.

This writer still remembers as a child listening to an audiocassette, which sold like hot cakes in the ’70s, in which Moin Akhtar presented a series of impersonations and sound-effects, along with a humorous sketch of a villager who tries to copy an urbanite and in the process behaves like a nincompoop.

The fame was soon followed by critical acclaim when Moin Akhtar joined hands with humourist Anwar Maqsood and did a host of shows with him. Beginning with an episode of Angan Terha in which Moin Akhtar played the role of a poet looking for a place to live, the duo came up with one gem after another.

The combination resulted in classics like Studio 2½ and Studio Poney Teen in which Moin Akhtar did the part of one of the interviewees and Anwar Maqsood the interviewer. Akhtar’s zany but meaningful answers to Anwar Maqsood’s ostensibly innocuous questions created a magic the kind of which was never witnessed on Pakistani television. Comedienne Bushra Ansari also became part of their group and they did some memorable shows together.

Moin Akhtar didn’t confine his talent to comedy acts. He proved his versatility by playing the protagonist in a long-play Rozy written by Imran Aslam and directed by Sahira Kazmi. Moin Akhtar did the part of a man who assumes the garb of a woman in order to find employment. His performance was not only appreciated in Pakistan but even across the border it earned him a great many fans. Rozy was an adaptation of a successful Hollywood film Tootsie.

On his inevitable comparison with Tootsie’s star Dustin Hoffman, Moin Akhtar often claimed that he never saw the film until after he’d done the play. The late actor’s another outstanding performance was witnessed in a play Half Plate, written by Anwar Maqsood and directed by Mohsin Ali.

He portrayed the personality of a self-obsessed poet who had a past (and a nagging wife) that he seldom liked to remember. The acting was right out of the top drawer and intelligently complemented the script.

Moin Akhtar and Anwar Maqsood’s duo had become so inseparable that even after the advent of satellite TV they were asked by different channels to work together. Their last show as the writer-actor combo was Loose Talk which ran for many years and Moin Akhtar assumed hundreds of characters in it.

These days a drama serial featuring Moin Akhtar as the main character is on air on a local private channel.

Apart from a worthy body of work on television, Moin Akhtar acted in a few films, including Tum Sa Nahin Dekha and Mr Tabedar. His theatre performances alongside Umar Sharif in stage dramas like Buddha Ghar Pe Hai were also a commercial success.

In recognition of his talent and work the government had bestowed on Moin Akhtar the Sitara-i-Imtiaz and Pride of Performance award. The actor’s namaz-i-janaza will be held today after Zohr at Masjid-i-Toheed in DHA Phase II, Malir Cantt.