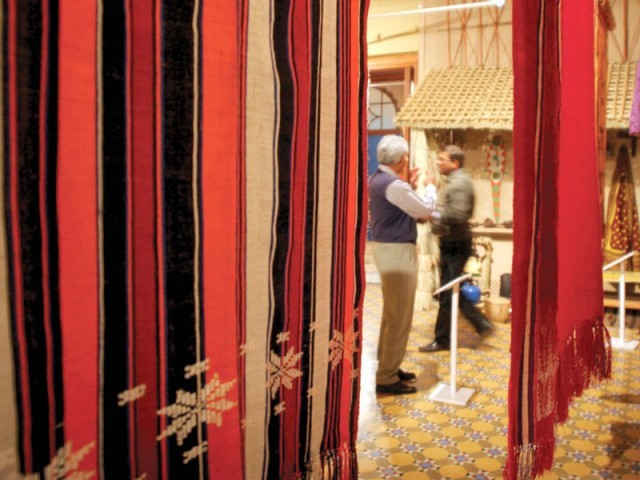 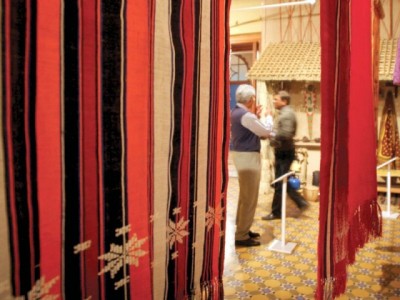 These 30 to 40 textile samples are from the personal collection of John Gillow, who has spent three decades studying textiles. He has also written a number of books on the subject.

Gillow, who hails from Cambridge, said that he was 17 years old when his interest developed in collecting textiles. “I roamed the bazaars of Istanbul and collected textiles, fur carpets and jewelery.”

Gillow then travelled to Lebanon, Morocco and Syria in search of textiles and after graduating from university, he went to Iran, Afghanistan and Pakistan.

While talking to The Express Tribune, Gillow said that he was inspired by the African textile. “It is has a very dramatic impact. Also, I love the use of the indigo colour.”

He has visited Pakistan 40 times, and is fond of Sindhi textiles, their embroidery and mirror work. Whenever Gillow comes to Karachi, he makes sure he goes to Zainab Market.

The exhibition, which will run till the end of February, is divided into various sections. The first one is on woven patterns. A piece, tiled Cloth for Mourning from Ghana with its motifs of sun, stars, and the moon stood out. So did a red shawl made of sheep’s wool from Tunisia, which is worn on weddings. Visitors can also examine ceremonial attire along with a number of traditional headcovers and skirts.

But it seemed to the tie-and-dyed and indigo-dyed textiles that hit a note with visitors. Gillow’s favourite among them was a long ceremonial dyed textile from Cameroon, which he explained is used as a backdrop at ceremonies.

At the end on display was a section title ‘Affinities’ with textiles from Sindh, Punjab and Balochistan, which were remarkably similar to the African textiles. In particular, the Khes, a man’s shawl from Hyderabad, had surprisingly similar patterns to the African geometrics.

Gillow will conduct a gallery tour on Wednesday January 11 at 11:30 am.