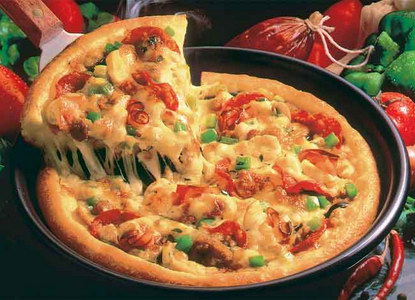 America’s obsession with junk food may end on a healthy note. Researchers in the Department of Nutrition and Food Science at the University of Maryland have determined a way to increase the antioxidant content of whole wheat pizza dough.

Antioxidants protect cells from damage caused by unstable molecules, called free radicals. Many scientists believe antioxidants lower the risk of certain types of cancer, heart disease and other aging-associated health problems. Increasing the antioxidant content of popular food products may have a positive impact on the health of our nation.

The scientists determined a way to boost the antioxidant content of pizza dough simply by optimizing the fermentation method and baking conditions (time and temperature). Antioxidants are released by chemical reactions induced by yeast during the fermentation process and accumulate in the dough matrix. By extending the time dough is allowed to rise, in some cases up to 48 hours, the yeast have more time to ferment and more antioxidants accumulate in the dough. The available antioxidants in the baked pizza crust were also enhanced by increasing the baking temperature from 400 to 550 degrees Fahrenheit and extending the baking time from seven to 14 minutes, which increased the available antioxidant content of the crust by 82 and 60 percent, respectively.

Why wheat dough and not white?

It is a simple matter of where the antioxidant compounds are found in the plant material. Antioxidant concentrations are high in the bran of the whole wheat grain, which is removed when flour is refined.

The scientists took the experiment out of the laboratory and into the kitchen and found they could replicate the same results at home. Dr. Liangli Lucy Yu, associate professor of the department of nutrition and food science at the University of Maryland, stated, “This is something people can really do at home. You don’t have to have extra cost. You don’t have to have extra effort.”

In the future, the scientists believe it may be possible to increase the antioxidant availability of other fermentable products, such as bread and beer. In a bright new future, we may be preventing disease by eating healthy bread and pizza and drinking a cold beer.

The research findings were presented in the 233rd meeting of the American Chemical Society.