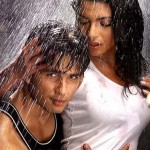 Priyanka Chopra and Shahid Kapoor are set to sizzle Bollywood. The couple is most sought these days and on the way to making of the hottest couple of the tinsel town.

These days Saif Ali Khan and Kareena Kapoor are said to be the Bollywood hottest couple.

Priyanka was in love with Harman Baweja but all turned fiasco and it seems it’s a distant memory for her.

These days the couple is talk of the town and it’s being said in all the newspapers and websites that Shahid Kapoor is the only reason of Priyanka’s illness.

Well, finally it seems like Priyanka Chopra is seeing her future in Shahid Kapoor, who is the new man in her life. Both are working in ‘Kaminey’, which is going to be released soon.