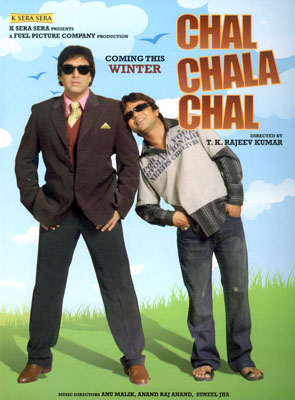 Deepak (Govinda)’s ex-school principal father wins a long running court case against his school and ends up getting a school bus as compensation. But instead of selling it off, Deepak’s father advises him to run it and earn money. Deepak’s two sisters (Upasana Singh and Amita Nangia) and their respective Ghar-Jamai hubbies (Asrani and Manoj Joshi) are against it as they feel it’s a very low profile job. They aim to sell it off so that they can earn some share from selling it off. But Deepak values his father’s judgment and with some financial help coming up from his good friend Sundar (Rajpal Yadav) he establishes a company and names it Chal Chala Chal transport. But as the noble hearted Deepak begins his transport business, everyone he starts encountering wants to extract money from him. What roller coaster rid it all leads to forms the rest of the film.

CCC would have been surefire hit had it come some 8-10 years ago. Though really entertaining at places, the film fails to qualify as a worth watch because of the second half which wanders off aimlessly. The story keeps moving round and round, the jokes and gags start falling flat and appearing dated and above all Govinda doesn’t seem to be in the form he used to be once in his hey days. Also one wonders why everyone in the film is shrieking so loudly every time. But to give due credit where it deserves, the characterizations have turned out well and some of the sequences (plenty in the bus) make you really laugh out loud.

Age has started to show on Govinda’s face and he should stop doing youthful roles. This film would have been a much better one, had there been a young actor doing his part. Reema Sen is an average actress who carries limited expressions on her face. Also her pairing with Govinda looks awfully odd. Rajpal Yadav however, seems to be in top form and delivers the goods. Razzaak Khan as the bus driver and Asif Basra as the sweet talking conductor are entertaining. Murli Sharms is okay but Manoj Joshi is irritatingly loud.

The camerawork is strictly functional, editing leaves a lot to be desired and the set design too tacky. The music barring the catchy title song is no great shakes.

Chal Chala Chal is the kind of a film which you can easily avoid going to a theatre to watch for but it won’t harm you if you catch it on a DVD or satellite channels.