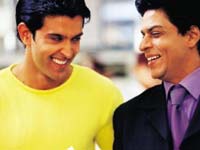 But there have been unusual friendships too, like between the likes of Salman Khan-Aamir Khan and Akshay Kumar-Aamir. Now the buzz is that Shahrukh Khan and Hrithik Roshan have been bonding big time.

The actors who played brothers might have had some problems while making the Krazzy 4 song but that’s a thing of the past now. The Jodhaa Akbar actor and King Khan have been catching up a lot these days. Hrithik is a permanent fixture at Mannat and he and wife Sussanne have been at most parties at King Khan’s home. Not only that, they even partied together when they were in Dubai last year for the opening of Atlantis. Shahrukh Khan was at Roshan Jr’s home a few nights ago.

A source said, “It was no occasion as such, just a casual affair. SRK was there for quite a while. Later in the night, the host and the guests decided to play dumb charades of Hollywood flicks. The guests were divided into two teams of Hrithik and Shahrukh. Both sides did their bit of miming and SRK’s team was declared winner.”

They manage to keep the dosti going in spite of their busy schedules. The source added, “Though Hrithik is extremely busy with his home production Kites, he is still taking time out to catch up with Shahrukh. A few weeks ago, the duo was even spotted chilling out together.”

But this is not the first time that the two have bonded. It has happened in the past too.

“In 2006 when Krrish was released, Hrithik had a special screening for Shahrukh to garner his frank opinion. Later, when Hrithik was in London to promote the film, Shahrukh (who was holidaying there) had hosted a special dinner for him. B-Town is slowly getting a whiff of the Shahrukh-Hrithik bonding. Both stars refrain from talking about each other. Hrithik is known for being extremely guarded while Shahrukh has not yet given his reply to Aamir’s recent outbursts against him.”

This sure is one special yaari. We just hope it stands the test of time, unlike all other crumbling friendships in B-Town.