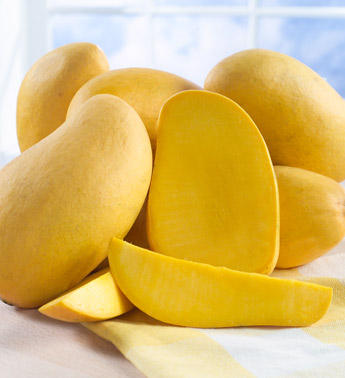 It is one of the most popular and best-loved fruits worldwide. Because of its excellent flavor, attractive fragrance, beautiful shades of color, delicious taste and healthful value, mango is now recognized as one of the best fruit in the world market. Mango has had a prominent position among the commercial fruits of Pakistan.

It enjoys second position after citrus in Pakistan. The Pakistani Mango is well known for its taste and quality abroad. More than 54,000 tons of mangoes are exported to neighboring and European countries.

Mangoes are mainly eaten fresh, but are also used in preparing squash, jam, and other preserves and sometimes canned. Young mangoes are used in making mango chutneys and pickles “achar”. It is one of the most extensively exploited fruits for food, juice, flavor, fragrance and color, making it a common ingredient in new functional foods often called “super fruits. Experts maintain that mango is some sort of comfort food, imparting deep psychological satisfaction, because of their stomach soothing properties, due to the presence of an enzyme.

Pakistan is the fifth largest producer and third largest exporter of mangoes in the world, producing 1,674,000 tons annually with the Gulf and Saudi Arabia as traditional import markets, although some headway has been made in creating a niche in European countries.Hundreds of varieties of mangoes are known to exist in Pakistan. Mango varieties have been known for attractive colors, savoring smell, delightful taste and high nutritive value. The most popular commercial varieties – all different in colors and sizes, and each with a distinct flavor and taste – include;

Mango fruits contain 10-20% sugar, an important source of vitamin A and C and contain vitamin B. Small amount of protein, Iron, Calcium and Phosphorus