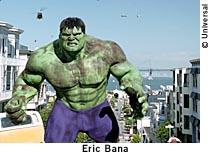 Written by David Hayter (“X-Men”) and Lee’s longtime collaborator James Schamus and set in modern-day Berkeley, Calif., “The Hulk’s” plot follows the misunderstood research scientist Dr. Bruce Banner and his angry alter-ego, both played by Eric Bana, as he is pursued by the military as well as threatening evil forces.

In a brilliant opening titles sequence (designed by yU+co), we see a maverick scientist experiment in genetic modification. Failures result, but he perseveres. Then the consequences of his own self-experimental research hits home, literally, when his wife has a baby. Whatever mutation he conjured up in that devil’s brew is passed on to his son. His boss, a military commander, tosses the scientist out of his own lab, but not before the scientist sabotages the lab and rushes home to relieve his son of the burden the boy carries without his knowledge.

Years later, scientist Bruce Banner (Eric Bana) follows unknowingly in his father’s footsteps as a researcher in genetic technology. He has repressed all memory of his first four years of life, believing that his parents died when he was an infant. Bruce is so emotionally cut off from others that it has undermined his relationship with girlfriend and fellow researcher Betty Ross (Jennifer Connelly).

Then their lab experiments attract the unwanted attention of Betty’s estranged father, Gen. Ross (Sam Elliott), and rival researcher Glenn Talbot (Josh Lucas). Someone else mysteriously lurks around the lab, the new night janitor David (Nick Nolte), who turns out to be Bruce’s father, recently released from prison.

A lab accident exposes Bruce to what should be a fatal dose of gamma radiation. But his dad’s mutating gene not only allows him to withstand the gammas, the combination serves to kick-start the “monster” within. Now when severely angered, the scrambled DNA turns Bruce into the Hulk. Unlike the old CBS series “The Incredible Hulk” (1977-82), in which Bill Bixby’s Bruce steps off camera in favor of bodybuilder Lou Ferrigno’s Hulk, Bruce’s alter ego here is a massive, green CGI creature that can withstand missiles, leap into the sky and shake up the entire U.S. military.

This character has already caused controversy, the major complaint from some moviegoers being that they have a hard time investing emotionally in a CGI-created character. But not only does this character conform to the Hulk from the Marvel Comics, this is a true-blue (make that green) superhero.