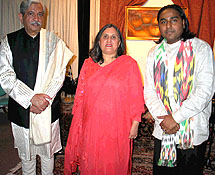 Ustad Shafqat Ali Khan performed in Geneva and in the “Pakistan House”, the residence of the Ambassador of Pakistan Bern, Switzerland.

This is the third consecutive year that the Swiss Pakistan Society has invited Ustad Shafqat Ali Khan to Switzerland for concert tours. On 5 April 2004 the Ambassador of Pakistan, H.E. Mrs Fauzia Abbas, and the Swiss Pakistan Society hosted a concert at the Ambassador’s residence. It was a selected audience of Ambassadors of the friendly nations to Pakistan and high ranking officials of the Swiss government. Ustad Shafqat Ali Khan captured the audience with a classical Tarana followed by Thumri, Sufi Kafi and Ghazals. He concluded the concert with a powerful Dhamal. Many guests were appeared to be taken by it and some admitted that the music has gone through them and deeply touched them.

The Pakistani Ambassador, H.E. Mrs Fauzia Abbas, received compliments from guests for giving them a taste of such a powerful music. Among the biggest admirers was the Indian Ambassador to Bern, Mr. Goyal, who is a connoisseur of classical Ragas and is a fan of the legendary Ustad Salamat Ali Khan – the Father of Ustad Shafqat Ali Khan. His Excellency Mr. Goyal stayed till late evening for another session of Shafqat’s performance, after the rest of the guest had departed.

“Shafqat is indeed a versatile vocalist”, says Mr Saad Khan the Executive Vice President of the Swiss Pakistan Society. “He is one of the only kinds left in Pakistan for classical music, but he is equally good in Ghazals and Sufi music. He is young, determined and sincere to this art that he has inherited from the 10 generations of Sham Chaurasi Gharana. He is an unsung jewel in the treasure of the cultural heritage of Pakistan, and we must give him a fair chance to prove himself”.

Mr. Khan thinks that Pakistanis are unfortunately slow in recognising their music talents. He recalls that Ustad Fateh Ali Khan was already well known in Switzerland and France, during his early days of fame, much before he was recognised by the public in Pakistan. “I have similar hopes for Ustad Shafqat Ali Khan” adds Mr. Khan, “I think he has the right stuff, and perhaps Switzerland would offer him the launching pad for the deserving fame”.