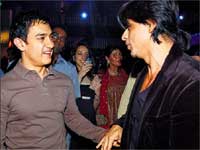 On his 44th birthday Aamir Khan decided to end the war with Shahrukh Khan. The perfectionist actor said that he loves and respects Shahrukh and wishes him successful life and career. He also wished that all his movies become hits. The two Khans have recently had a war of words against each other with both of them taking a dig at each other whenever that have been in front of the media.

Contradicting himself moments later Aamir said that he was not competing with anyone in the industry and was not interested in the number game too. He added that he is following excellence and not success now in his career and believes success will come with excellence. Surely Aamir takes a dig at Shahrukh even while making peace with him!