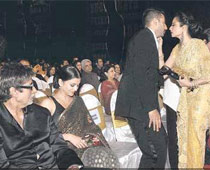 It seems the alleged affair between Big B and Rekha will never stop haunting them, and there was evidence of this at the recent Filmfare awards.

The scene: the front row of the auditorium where all the A-list Bollywood stars were sitting. From the left, it was Priyanka Chopra, SRK, Abhishek, Aishwarya and then Big B himself.

Rekha appeared on the scene, and as is her custom, went on to meet everyone. She hugged and kissed each and every one of the stars sitting in the front row, including Abhishek.

She then went on to hug Ash, and all of a sudden, Big B, who was next in line, got up and walked away. This may have been a smart, though ultimately transparent, move, because propriety would have demanded that she acknowledge him.

Pictures from the event reveal that while Big B walked away just in time to avoid an incredibly awkward situation, he was intently watching Rekha in the minutes preceeding his abrupt walk-out.