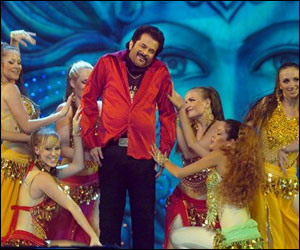 Washington: Bollywood actor Anil Kapoor will be honoured at the seventh annual Indian Film Festival of Los Angeles next month.

The 49-year-old actor, who played the role of TV host in the Oscar winning ‘Slumdog Millionaire’, will be honoured with the screenings of two classic films in which he stars, 1991’s ‘Lahme’ and 1997’s ‘Virasat’, as well as ‘Gandhi, My Father’, which he produced.

“I am humbled and honoured that my work as an actor and film-maker has been chosen to receive such a fantastic tribute,” ‘Contactmusic’ quoted Kapoor as saying.

Meanwhile, he has also advised the parents of his young co-stars in Slumdog to focus on their kids’ education rather than acting careers.

Kapoor said that he has already spoken to the children’s parents – and offered them advice.