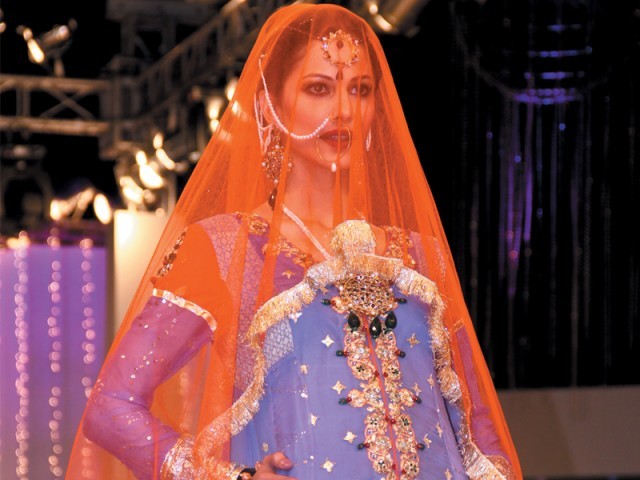 Pakistan’s premiere event for bridal wear, the Bridal Couture Week (BCW) 2011, kicked off on October 15 in Lahore. In an attempt to add Indian flavor to the two-day event, BCW not only saw creations by renowned Pakistani designers but also by Indian bridal couture designers Rabbani and Rakha.

It was interesting to see how commercial brands took an innovative turn and played with long hemlines to create bridals that were in essence, full length gowns — often with trails. Although, Pakistani brides do not typically wear gowns, which are seen as a foreign construct, many Muslim brides around the world — for instance in Iran and Saudi Arabia — don the gowns with a net or lace veil that covers the face in a show of traditional modesty.

Since the full-length silhouette doesn’t seem to leave us, it is only appropriate that it be extended to bridal looks as well. It’s an economic and elegant option in the face of soaring prices when one can barely afford the multilayered heavily-embellished look that designers Ali Xeeshan and Fahad Hussayn brought on the ramp. What can be successfully done, however, is to marry the net veil look suggested by Hussayn to the emerging gown trend by the commercial market to retain the tradition in a modern twist of the bridal look.

The overarching trend for jewellery was largely fixated on recreating the Mughal grandeur. Long serpentine maalaas and saat laraas, jhumkas and teekas dominated the general look for brides. If there was any contemporary take on the traditional, it was still very much subcontinental in its spherical design with a liberal use of semi-precious stones. An emerging trend, and one that tennis champ Aisamul Haq’s fiance sported at their engagement, was a gigantic teeka worn with ornate dangling earrings; no necklace is added or required to complete the look.

As with the first round of BCW, one saw Hassan Sheheryar Yasin return to orchestrating the show, which worked wonders in ensuring that the choreography for each participating brand was well thought out and executed to make an impact on the runway. As with the previous shows, the event was interspersed with dance performances choreographed by Lollywood’s Pappu Samrat. Model Fia did a traditional classic dance this time around and new talent Mariam shocked audiences with her gyrating moves that belong more to Punjabi cinema and street theatre than the ramp.

However, the one performance that will put this season’s BCW down in history was a stunning swirling dervish dance, the Tanoura, performed by young Egyptian boy Hamada who wowed the audience with his flamboyant costume and spell-binding performance of over 20 minutes in circulation.

Ever since the fashion week culture began in the country three years ago, as did the trend to leave a lasting impression with a strong closing made by a celebrity friend of the designer. In round three of BCW, one saw Resham and Reema make a comeback, while Shaan and cricketer Wasim Akram also graced the ramp. While Lollywood stars are used to making such appearances, Akram, who despite his perennial presence on television, was clearly not comfortable on the ramp. His heavy awkward walk, slouch and an appalling paunch terribly offset the otherwise dignified sherwani he wore.

Yet, despite the star power, it was upcoming singer Quratulain Balouch who stole the limelight in a Fahad Hussayn ensemble, replete with traditional headgear. Balouch closed for the designer with Reshma’s classic, “Akhian Nu Rehn De”. Her powerful vocals, confident walk and elegant strides in a traditional sari made her look like a Bengali princess and it was heartening to see Hussayn supporting a fresh talent like Balouch in giving her the right push in fashion.