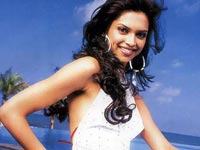 Unlike Bebo and PC who decided to work gratis for SRK’s Billu Barber, Deepika kept her cheque. Stars, roped in for a song or special appearances, often waive off their fees. Amitabh Bachchan did Paheli gratis for Shahrukh Khan. Ditto in Om Shanti Om with Salman Khan, Saif Ali Khan, Sanjay Dutt and a host of other actors. A little known fact: Deepika Padukone refused to accept any remuneration for Red Chillies’ (SRK’s production house) OSO, as she considered a debut film opposite King Khan, to be fee enough.

Now that Deepika has done a song for Red Chillies’ next Billu Barber she didn’t think twice before accepting the cheque offered to her with a polite ‘thank you’. This, even though the other two actresses who have shot songs for the film Kareena Kapoor and Priyanka Chopra waived off their fees.

It is learnt that SRK sent cheques to all the actresses. While Kareena and Priyanka got prices commensurate with their star status and seniority, Deepika got Rs 40 lakh. While Bebo and PC returned their cheques saying they had done it for SRK, Deepika deposited hers in her bank.

A source close to Deepika says, “Kareena and Priyanka can afford to forego their payment as they are established actresses, Deepika is starting out. She wouldn’t hear about being paid for her debut film as she felt obliged to Farah Khan and SRK for her break.” Billu Barber, directed by Priyadarshan, has Shahrukh play superstar Sahil Khan, who comes to shoot in his childhood friend Billu’s (Irrfan Khan) village. SRK and Deepika remained unavailable for comment.