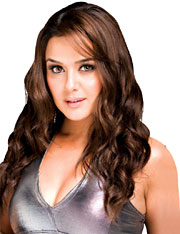 New Delhi (IANS): Bollywood actress Preity Zinta believes that every scene in her forthcoming release “Videsh”, a film about a battered Punjabi housewife in Canada, is some woman’s story.

The movie deals with domestic violence and Ms. Zinta is confident that women will identify with her character.

“Every scene in this film is some woman’s story. It is intense and beautiful. I can’t talk enough of the film. I just want every woman, man and family to go and watch this film. It is very important for people to support films like these, which showcase a real slice-of-life,” Ms. Zinta told reporters here Friday.

The film, directed by acclaimed filmmaker Deepa Mehta, is about a battered Punjabi housewife in Canada. Ms. Zinta, who plays the lead in the film and has already bagged the best actress award at the Chicago Film Festival, says the subject of the film touched her and it was the realistic nature of the script that she found challenging.

“When Deepa offered me this role, it was a dream come true. I knew it would be a huge step towards something different in my career. It was definitely a difficult role. But it has touched me. Normally we see either black or white characters in films. But very few films offer an actor to play grey characters that are closer to reality. But with this film I got an opportunity to play such a true character,” she said.

In “Videsh”, which released as “Heaven On Earth” abroad, Zinta is sharing screen space with newcomer Vansh Bhardwaj, but she also has another co-star – a giant snake, that “scared the hell” out of her.

“Vansh, my co-star in the film really surprised me. I was nervous to be cast opposite a newcomer, but he was very good. And I had a snake as my co-star who scared the hell out of me.

“When I was told to shoot with the snake, I acted bold and told the unit that I want a real snake for the scenes, but when I saw the snake I got extremely scared. Still working on this film was the most enriching experience as an actor. When I am 80 years old and I’ll look back, I’m sure ‘Videsh’ will be among the top five in the list of my favourite films,” Ms. Zinta said.

The film, slated for release March 27, was mainly shot in Toronto with a short sequence filmed in Chandigarh. It was shot in both Hindi and Punjabi.

Since the actress hails from Himachal Pradesh, she faced problems delivering dialogues in Punjabi.

“Language was an issue with me, I had to learn it. I had to struggle with it. People think that I know Punjabi very well, but that’s not true. I had to work on that. The only four words I knew were ‘sasriyakaal’, ‘chak de phatte’, ‘balle balle’ and ‘aaho’,” she said.

Ms. Zinta also underwent a workshop for the film and her efforts have paid off with a nomination in the best actress category of the 24th Genie Awards, to be held in Canada in April.