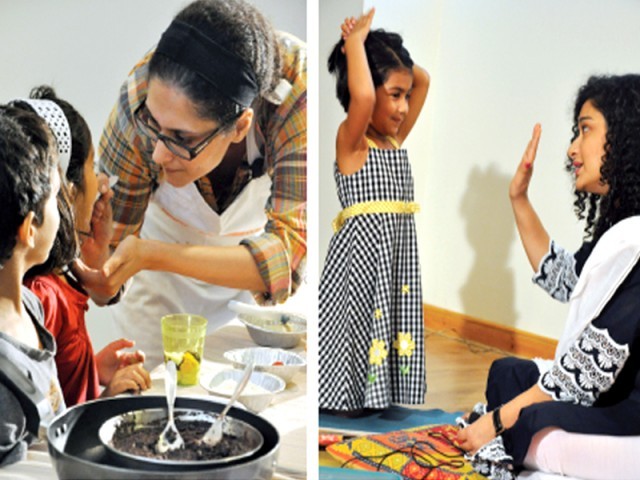 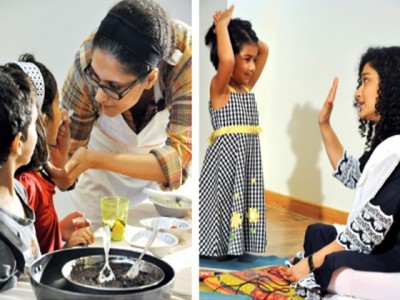 Ask any child today what his or her favorite activity or hobby is and you will get a plethora of answers, but none would be reading.

This is a deplorable fact that has become a bane for most mothers and teachers; yet there seems to be no solution to lure those young eyes away from the glare of television and computer screens. “There are just no avenues for entertainment for children anymore,” complained Samina Sadiq a mother of an eight-year-old son and a five-year-old daughter, who took out time on Sunday to attend T2F’s latest initiative called Kahani Time.

Conceptualized by Rabia Gharib of Toffee TV (a delicious online TV channel for children) and given life by thespian Sania Saeed, Kahani Time was an afternoon of interactive story telling (in Urdu, mind you!) to reacquaint the younger lot with the wonders of reading and storytelling. “There’s no storytelling for kids anymore,” bemoaned Saeed. “I don’t deny the importance of films and television at all, but reading is equally important media. We are all, unfortunately, disconnected (on a psychological and social level) with our fellow beings, and even more so with kids,” she said.

Traditionally, the role of the storyteller rested heavily with grandparents who would narrate and concoct stories from their own experiences or imagination. But with the breakdown of the traditional family to a nuclear family, that pivotal role has been lost, though some young educated mothers still manage to read to their children before bedtime. However, what parents, like Sadiq, enjoyed the most, was how Saeed pushed the children to develop a story along with her and the fact that the whole afternoon was conducted in Urdu. “It’s amazing that during the whole session not a single word of English was used,” shared Sadiq. “We need to start promoting our own language and it’s even more important to do so for parents like us who don’t speak Urdu very well at home.”

In this regard, choosing someone like Saeed, an icon of Urdu theatre and television plays, was a perfect choice. “To keep your culture alive you must speak in your mother tongue at home, no matter what your ethnicity is,” she stressed. But as a young adult Gabeena Mamoon points out, that many schools refuse admissions to children who can’t converse in English, drawing on her own example as her Pashto-speaking parents struggled to find a school for her. “Kids will always pick up English at school, so we shouldn’t worry about that,” asserted Saeed.

A key aspect of Kahani Time was the mingling of children from different schools and ages, something that doesn’t happen often. “To enact a story, to communicate collectively with people beyond your own little cliques is important in building exposure, discipline and etiquette amongst children,” added Saeed, who, along with Sabeen Mehmud of the T2F, eventually hopes to bring students from private and public schools together to break down class barriers and gradually develop a children’s theatre from this reading circle.

As delightful as the event was with Saeed’s readings followed by Poppy’s culinary treats, Mehnaz Mehmud, an educationist made a thought-provoking observation, “why must we always associate something tangible with an activity? The kids should have just come for the reading. The snacks made the event a bit commercial.” Mehmud’s criticism is an important perspective on attempting to change mindsets at the grass root level. Our entire culture has become premised on receiving something material and there is no pursuit of anything, without achieving anything tangible. “Children should be taught to seek learning purely for its sake, and not for some material gain,” added Mehmud.

But as all the organizers of Kahani Time concluded, “We learnt so much today and it will be a great activity if we can have it every fortnight.” RJ and book-enthusiast Ayesha Raja had attempted a similar readers’ theatre in Lahore, but was unable to sustain it due to logistical issues. However, one hopes that with Kahani Time becoming a more regular feature in Karachi, other cities will soon follow this supremely educational and entertaining idea of reviving the art of storytelling.