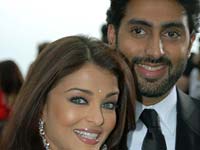 Abhishek Bachchan and Aishwarya Bachchan had shot an intimate lovemaking scene for Mani Ratnam’s Raavan. But all of a sudden the director has decided to chop off the scene from the movie as it might hurt the religious sentiments of people. The movie is a modern day adaptation of the great ancient epic Ramayana and thus Mani does not want to invite protests from the religious groups.

In the movie Aishwarya plays the role of Sita who is being kidnapped by Abhishek who plays Raavana. Over time the two fall in love with each other and to portray this the lovemaking scene was shot between them. Mani however denies parallels with Ramayana and says it is a modern day love story and has nothing to do with the ancient epic.