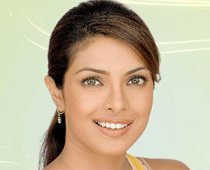 She donned trendy mini skirts and a bikini in Dostana and was an absolute stunner on the ramp in Fashion, but Priyanka Chopra is going the de-glam way for Vishal Bharadwaj’s Kaminay.

“In terms of look, it’s definitely not glamorous. In fact, you don’t really see me wearing too much make up in the film,” Priyanka said.

Kaminay will be her first release of 2009 as a leading lady after a hectic 2008, which saw her featuring in six back-to-back releases – Love Story 2050, God Tussi Great Ho, Chamku, Drona, Fashion and Dostana.

What makes Kaminay special is that she has got to work with Bharadwaj, a master story teller known for giving his leading ladies a very ‘real’ lived-in look.

Speaking about her character in the film, Priyanka says: “Sweety is a very real character. She is a college-going girl in her early 20s and we have tried to keep her extremely believable.”

“We tried to ensure that the look fits the characterisation,” she adds.

Since she was seen in a glam avatar in both Fashion and Dostana, did she have any apprehensions about donning an entirely distinct look in Kaminay?

“Not at all. It was a conscious decision. I have always striven to do different things in each and every film of mine, be it with the character or the look. That’s visible in films like Don, Love Story 2050, Fashion and Dostana.

“In continuation of that, Kaminay and What’s Your Rashee (by Ashutosh Gowariker) will see me essaying different characters, far removed from what I have ever played. I am very excited about both!”

Priyanka stars opposite Shahid Kapur in Kaminay and the actor too is said to have a distinct look. Shahid, known for his chocolate boy image, plays a double role, and one of the characters played by him not just stammers but also keeps an unkempt look.

But audiences will have to wait to see their makeovers until June 5, when Kaminay will hit the screens.