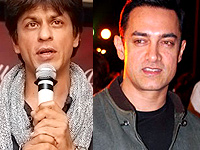 Is Shahrukh Khan, the actor who tops the list when it comes to the highest number of product endorsements by a film star slowly loosing his grip?

Recently the Pepsi decided to move on leaving their star brand ambassador SRK behind as they thought that they need a much younger lead endorser.

The soft drink giant saying goodbye to Shah Rukh can be taken as the end of a lengthy chapter as the association of the company with the film star started long back.

Even when a Pepsi advertisement featuring Shah Rukh and the new kid Ranbir Kapoor came last year, no one thought that King Khan who is still considered as the most bankable Indian star in overseas Bollywood market will be shown the door.

When Shah Rukh is reeling under the pressure of two of his past high profile releases not able to create any magic at the box office, the other leading Khan is just keeping on rocking.

The man being talked about is Aamir Khan who with his planning, precise selection and patience has not missed his intended targets for a couple of years now.

This has led to the creation of a certain aura around him where no one is interested in talking about his advancing age and the relation between his age and the kind of roles he does.

Out of the three top Khans, it is Aamir who in spite of crossing 40 can still pull of a college student’s role with ease and people just not liking to discuss about it.

His role as the college student in the forthcoming film ‘3 idiots’ which talks about the life in an Indian Institute of Technology campus stands testimony to the above mentioned fact.

And when compared with SRK and Pepsi parting ways, Coca Cola has only made its bond with Aamir stronger.

It is heard that Coke has extended its contract with Aamir after paying him an exorbitant price of Rs.10 crore.

Well, the question of who you are never has any importance.

As they say in Bollywood, the only thing that matters is the performance of your last film, especially when you are a leading man.