Chocolates are one of the most popular gifts given during holiday seasons such as, Easter, Halloween, Christmas, and Valentines. Although they make a great gift, chocolate should only be consumed in moderation. There are some benefits to certain chocolates, such as dark chocolates, but chocolate in general can have ill effects if consumed in large quantities.

Chocolate is one of the most popular flavors in the world. It comes in a variety of forms from chocolate drinks to solid chocolates. There are also different types of chocolate such as milk chocolate and dark chocolate. There is also white chocolate, but it isn’t considered to be true chocolate because although it contains cocoa butter, sugar, and milk, it does not contain cocoa solids.

The only chocolate to have any good benefits is dark chocolate. Dark chocolate has a higher content of cocoa which is a good source of Gallic acid and flavonoids epicatechin. Both of these are thought to promote good cardiovascular health. This type of chocolate also contains antioxidants that get rid of destructive molecules that cause heart disease called free radicals. Another great benefit to dark chocolate is the plant phenols, more specifically, cocoa phenols. Cocoa phenols have been known to lower blood pressure.

Although, dark chocolate has beneficial qualities, not all chocolates do. Milk chocolate and white chocolate seem to have no benefits at all. Even consuming milk while eating dark chocolate cancels out all the benefits listed above. Why is this? Milk interferes with the absorption of antioxidants. So if you consume dark chocolate, think twice before grabbing that glass of milk. 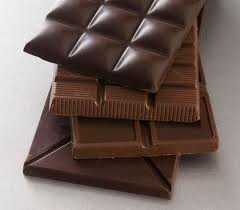 Another reason why chocolates should be consumed in moderation is its addictive properties. Although they say it is not physically addictive, it is emotionally addictive. Chocolate contains Xanthine which is similar to caffeine and can cause a person to feel jittery. It also contains Theophylline which stimulates the central nervous system and relaxes the bronchi in the lungs as well as relaxes the blood vessels. For some this may be beneficial, but not in overabundance. Phenylethylamine (PEA) is also present in chocolate. PEA is similar to amphetamines. It can cause a euphoric feeling similar to being in love, thus is probably the reason why most people turn to chocolate when they are feeling sad.

There are other health risks involved with over consumption of chocolate. Take obesity for example. No matter what chocolate a person consumes, you can be sure it high in calories which if unused can lead to weight gain. Even though dark chocolate can help a person’s cardiovascular health, obesity is detrimental to cardiovascular health. That isn’t a person’s only concern either. Because of the high content of sugar, you run the risk of developing diabetes.

Here is an alarming fact to know before you let your children consume large amounts of chocolate. Chocolate is also known to contain certain amounts of lead. Cocoa beans themselves have been known to absorb lead during the manufacturing process. The USDA did a study in 2004 and found that chocolate has been known to contain 0.0010 to 0.0965 mcg lead per gram. However, in 2002 a Swiss research group found that some chocolate contained as much as 0.769 mcg per gram. Keep in mind the international standard limit is 1 mcg of lead per gram. You might also want to keep in mind the fact that the effects of lead on children’s brain function, even small quantities of lead can cause permanent neurodevelopmental deficits including impaired IQ.

So before you allow your little ones to engorge themselves with chocolaty treats, consider the pros and cons. Remember, too much of a good thing is actually bad for you. Let your children have some chocolate goodies; just don’t let them consume it in mass quantities. Children learn good and bad habits from their parents. If you allow them to consume large amounts, they will think this is okay every time they get chocolate. The holidays are the perfect opportunity for you to educate your young ones and teach them self-discipline with what they consume and how much of it they consume. After all, why must all of the goodies be consumed in one to three days? Savor the spoils of the special occasions over time. They will be healthier for it.