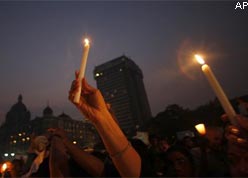 The famous singer of many hit Bollywood songs expressed sadness at the loss of lives and expressed solidarity with the family of the deceased.

“Murder of an innocent is like murder of entire humanity,” he said, before his live performance, yesterday evening.

A one-minute silence was also observed before the concert – Sufiana the Revival Sounds of the Soul – got underway. The singer, who has several recent Bollywood hit numbers to his credit, later enthralled a fully packed audience with his soulful numbers.