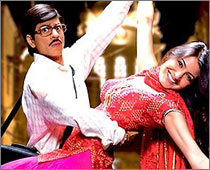 Yash Raj Films reeling under the impact of a series of setbacks in 2007-2008 is all set to make a grand comeback with the latest big-time release Rab Ne Bana De Jodi.

In spite of the terror attacks two weeks ago and the downward curve in Yash Raj’s recent image, the film had a massive opening which is expected to get better over the weekend.

Roshan Singh a leading exhibitor of Bihar sums up the unexpected euphoria surrounding the latest Shahrukh Khan starrer. “It’s opened to full houses, the best opening I’ve had for a Yash Raj Film in the last two years. I should know, because my theatre screens all the Yash Raj films in Patna. People love the film. Nobody expected Rab Ne… to be such a sweet love story. Shah Rukh as an ordinary small- town guy proves he is truly the king. And the new girl Anushka is a revelation.”

“And the whole idea of putting the couple into a dance reality-show is a stroke of genius. Audiences immediately identify and connect with this new medium of getting famous overnight,” says Roshan Singh.

In Mumbai, the responses on Friday ranged from exceptional to very very good. The Singh Is Kinng producer Vipul Shah said, “I’m not surprised by the warm welcome that the film has got. After 26/11 Mumbai needed a feel good film. And the Shahrukh-Aditya Chopra combination after eight years….Their last film together was Mohabbatein. I was really looking forward to the film. We don’t get a film from the team that gave us Dilwale Dulhaniya Le Jayenge that easily.”

With the heartening opening of Rab Ne Bana Di Jodi the industry reeling under the twin impact of a recession and 26/11 can breathe easy.

The best reaction to the film’s opening came from film’s director Aditya Chopra and leading man Shahrukh Khan’s best friend Karan Johar in New York. “Rab Ne Bana Di will prove once and for all that the Adi-Shahrukh jodi is god sent.”