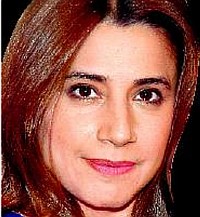 While Adnan Sami has been incessantly talking to the media about his marital discord with Sabah, she chose to remain silent. However, yesterday’s press conference by Adnan to declare that Sabah had withdrawn the charges of domestic violence against him disturbed her to no end. “The time has come for her to talk,” a friend of Sabah told Mumbai Mirror.

Although Sabah was initially reluctant, she finally agreed to tell us her side of the story. Commenting on Adnan’s claim that she had withdrawn the charges of domestic violence against him, Sabah said, “It’s just that the case is no more in the Andheri Magistrate Court. But that doesn’t mean that I have withdrawn the case. We will now be fighting the case only in the Family Court. I didn’t want to go to too many courts.”

Repenting her decision to marry Adnan, Sabah said, “I come from a different culture. My family didn’t want me to marry a Pakistani.”
Incidentally, Sabah and Adnan were married earlier after which they had divorced and remarried. “I gave him another chance. I had gone back to Dubai and later I thought of remarrying him. I thought that maybe he has become a better person. But it took me only 3-4 months to realise that things weren’t working out this time too. No woman would leave her husband if he was a good person. Adnan was harassing me physically and mentally,” she said.

“I am simply fighting for my dignity and justice. I am from Dubai and I hope I get justice in India. I have left my fate in God’s hands,” added Sabah.