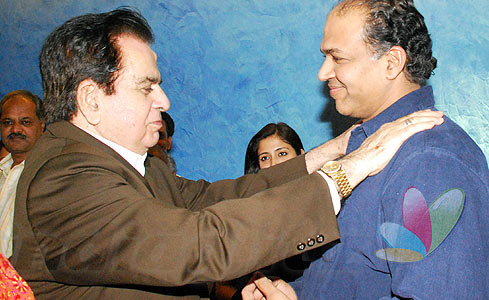 Ashutosh Gowariker’s ‘Jodhaa Akbar’ has not only left the Indian and interational audiences mesmerized, but also got Dilip Kumar to become nostalgic. At a private screen of Jodhaa Akbar; this historical saga starring Hrithik Roshan and Aishwarya Rai Bachchan not only enthralled the veteran actor, but also made him feel evoked his memories of Mughal-e-Azam.

Jodhaa Akbar released nearly a year back, yet it still continues to stay afresh in the minds of its audiences. Legendary actor Dilip Kumar says “Ashutosh was very kind to organize a special screening for me of the film. The movie was a delight. I discovered what a versatile actor Hrithik (Roshan) was. The film did remind me of the pains taken to film Mughal-e-Azam. Only directors like K. Asif and Ashutosh who have the patience, confidence and artistry to events and emotional conflicts with sensitivity can bring such historicals to life. Hrithik and Aishwarya played their roles with remarkable maturity and restraint.”

For a legend like Dilip Saab, Jodhaa Akbar was a walk down memory lane, which brought back the memories of one of the biggest all time classics on Indian Cinema.