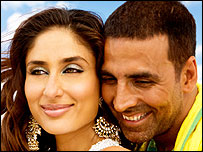 Scheduled to release this summer, the Akshay Kumar – Kareena Kapoor starrer, directed by Sabbir Khan is already creating a huge buzz and promises to be one of the biggest entertainer to hit screens this year.

An exciting ‘chemistry’ between a dashing stuntman in Hollywood who lives by the mantra ‘women are only good for…’ and a firebrand model who can more than stare down the most arrogant male with her caustic wit and sardonic tongue, Kambakkht Ishq creates a perfect premise for a thrilling battle of the sexes.

Eros is highly focused on Kambakkht Ishq – an exciting marriage between the east and the west, a romantic comedy and action with Hollywood favorites Sylvester Stallone, Brendan Routh and Denise Richards playing interesting roles in the film as well.
Eros International will be unveiling the first look of its highly awaited film ‘Kambakkht Ishq’, a co-production with Sajid Nadiadwala. The trailer will accompany Eros’ Aa Dekhen Zara which is releasing this Friday, March 27, 2009.