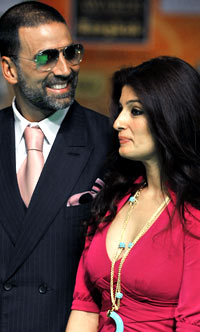 In a surprising revelation, martial arts-trained number one film star of the country Akshay Kumar said here last night that matching the Chinese fighters in his new blockbuster ‘Chandni Chowk To China’ was hard for him.

”The Chinese dudes are moulded for martial arts. Our bodies are not made like that. It was hard to match them.

I had to keep on practising and practising till I could reach a point where I could match them,” Akshay told mediapersons after landing in a hot balloon accompanied with actress Deepika Padukone at the sprawling Ambience Mall where around 20,000 fans greeted him with loud cheers amidst extensive fireworks, beating of drums and blaring songs of his new film which releases worldwide today.

”I have really worked hard for ‘Chandni Chowk To China’. I have broken my back doing stunts for this film. I almost gave my ‘jaan’ for it.”

The star, who has been churning out consecutive hits with the last being 2007’s mega blockbuster ‘Singh Is King’ and who reportedly charges the highest pay packet in Bollywood at Rs 19 crore per film, is confident about the outcome of ‘Chandni Chowk…’ as well as the faith people have in him as an entertainer.

”Tomorrow is the actual D-day for my film and we have Hollywood banner Warner Bros backing us having funded the film. Above all, 20,000 people have come here at this venue to see me. Last time when I was here, there were only 100 to 200 people.”

However, even amid the euphoria during his visit, Akshay’s humility was more than evident. With folded hands, he repeatedly expressed his gratitude to the people for bringing him so much fame and adulation.

At the same time, Akshay Kumar, who looks much younger off screen, is fully conscious that success is eventually ephemeral.

Asked whether too much success gives him any scares for the future, he replied, ”I don’t want to take anything for granted. I hope my eventual decline comes slowly and softly ao that my landing is cool.”

But he did go on to admit that constant upward rise in his film graph had put extensive pressure on his shoulders. ”In fact, my shoulders are bending lower and lower with it.”

Akshay was evasive when asked why he had left on stage his Screen Award in the popular category for ‘Singh Is King’ on Wedenesday night after reasoning that Aamir Khan deserved it for ‘Ghajini’.

”I do not want to talk much about it. I told the audiences why I did it there and then itself. I apologise to my people but I hope that they understand. I request ‘raat gayee, baat gayee, bhool jao’.”

The Bollywood star is totally unfazed by the emerging crop of stars in the film scenario. Without taking any names, he said, ”Heroes keep coming. Those who have staying power will stay, others will go. Jagah to chodni hi padti hai.”

When asked what was closer to his heart – comedy or action, the actor replied, ”My grandmother is 90 years old. She is my inspiration. She only wants to laugh. I even do stand-up comedy in front of her. This has made me realise that people just want to be entertained.”