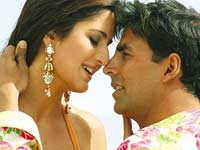 The non actress that she was, it wasn’t easy for Katrina Kaif to survive in B-Town despite the help from her man Salman Khan until a certain Mr. Akshay Kumar happened to her.

He too was looking for a perfect screen partner after his wifey Twinkle Khanna banned him from working with Priyanka Chopra[^] following too much talk of their link ups. And Katrina knew nothing about acting other than sitting and looking pretty and running around trees.

They share many hits like Namastey London[^] , Welcome and Singh Is King together. Both wanted to experiment and started doing films with other actors but things didn’t turn out to be as rosy as they thought they would be.

By the way, Akshay loves to do the same thing over and over again and put in a mishmash of comedy, action, romance etc in all his movies. And Katrina doesn’t have the prowess to do anything new either. So Chandni Chowk To China[^] fell flat on its face and the chemistry with Deepika didn’t work at all. Katrina’s movie with beau Salman Khan – Yuvvraaj did badly too.

So looks like now the twosome have realized their real worth now. When director Priyandarshan was making a choice of heroine for his next venture, De Dhana Dhan opposite Akshay, Katrina’s name came up. Akshay quickly recommended Katrina’s name as he again wanted to repeat the on-screen chemistry. Priyan was happy too and they are currently shooting in Singapore.

All looks well as of now unless something drastic happens. Watch out this space for more!