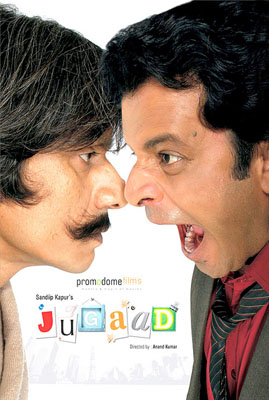 Jugaad: Is a fun ride

The film revolves around the infamous sealing issue that had been a hot issue in India’s capital city, Delhi in 2007-08. It tells the story of Sandip Kapur (Manoj Bajpai) who heads an advertising agency. He is already facing a demanding life when to add more trouble to his life his agency is sealed by the Muncipal Corporation of Delhi (MCD). Sandip fails to reinstate his company, despite his attempts and efforts. Eventually, he finds himself alone on the road, along with his team. Now desperately wanting to re-establish his agency, Sandip opts for ‘Jugaadbaazi’, a technique that people nowadays believe in more than anything else. What it all leads to and how he succeeds in getting together the property dealers, power brokers, politicians and senior officers involved into it forms the rest of this satirical comedy.

Anand Kumar who made a flop debut with Delhi Heights (2007) makes a solid comeback with an interesting comedy which makes you laugh out loud and yet make you think. Once again basing his film in Delhi just like his debut film, Anand makes a sincere attempt to unfold the real situation that prevailed in Delhi when MCD’s sealing drive was underway. Shot mostly in Delhi and Gurgaon, the film has tried to give a realistic scenario of the sealing drive. Anand also succeeds in showing the true never-say-die attitude of the Delhiites. The dialogues are extremely funny at places and the narration technique of the maker is good too. What also make the film more fun is the characterizations. The only weak department of the film is the music.

Manoj Bajpai doing a comic role is a revelation. He shows he is as good doing funny roles as he is in intense ones. Hrishita Bhatt playing the female lead doesn’t have much to do but she looks pretty nonetheless. Vijay Raaz brings the hall down with his antics and brings a smile on your face whenever he comes onscreen. Sanjay Mishra is another actor who is simply hilarious in the film.

Jugaad is a harmless entertainer and though it may not be another Khosla Ka Ghosla it is one of those rare good satirical comedies made in Bollywood. Definitely a better option than watching those mindless comedies that have been regularly hitting the screens off late.