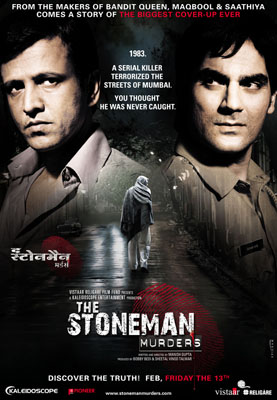 The film takes place in the city of Mumbai, where serial killings are taking place at a rapid pace. The serial killer, who has been named ‘Stoneman’ by the media – due to the way he kills people, has already claimed his fifth victim. Still, the case seems to be of little interest to Mumbai Police force. However, there is one person in, rather out of, the police who deems it to be of great importance – suspended sub-inspector Sanjay Shelar (Kay Kay Menon). To him, the killer presents an opportunity to come back into the police force. AIG Satam (Vikram Gokhale), who supports Sanjay, provides him secret aid as well, for tracking down the serial killer. However, posing as the biggest roadblock to Sanjay is Inspector Kedar Phadke (Arbaaz Khan), the officer who is in-charge of the case. As both of them do their investigation, delving deeper into the case, their ways clash. On the other hand, the killer continues to haunt the streets of Mumbai, claiming victim after victim. Will the police be able to know who ‘Stoneman’ is? If yes, will it be Sanjay or Kedar who solves the case?

Manish Gupta who wrote Ram Gopal Varma’s Sarkar makes a brilliant debut as a director with TSM. Also doubling up as a writer, mixing real life incident of the stone man killings in the early 80s and weaving a fictionalized story around it, Manish has succeeded in making a tight thriller which keeps the viewer guessing the true identity of the killer right till the final reel of the film. Keeping the length at just 1 hour 40 minutes, Manish has avoided adding unnecessary stuff making the film stay true to its thriller genre. Also, his technical team deserves special applause lending him able support. Almost the entire film takes place during the night and cameraman Srikanth Naroj has succeeded in brilliantly setting up the lights creating just the right atmosphere to give you the chills. The sound work is brilliant too and the background score builds up the necessary tension. Just that you feel that the item song was not needed in the film.

What takes the film to a higher level is the performance of Kay Kay Menon. He is a master in doing intense roles and yet again he delivers the goods. He carries the entire film on his shoulders and succeeds. Arbaaz Khan is in good form but Vikram Gokhale has nothing much to do. Rukhsar is strictly okay. Virendra Saxena leaves a mark in a small cameo.

TSM is an original piece of work and one of the finest thrillers made in Bollywood in recent times. Suspense film lovers should not give it a miss at any cost.