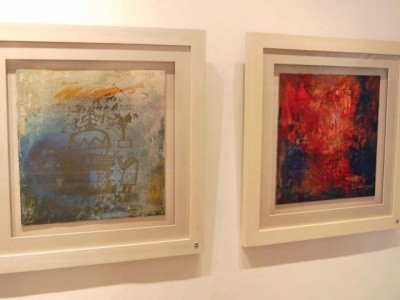 Mussarrat Nahid Imam draws inspiration from rock paintings and carvings along the Karakoram Highway for her latest exhibition that opened to the public at Nomad Art Gallery on Tuesday.

This is her 17th seventeenth solo exhibition and she has dedicated it to the artists who made these ancient artworks.

“I’m worried Diamer-Basha dam’s construction will sink the works. They will be lost to us even though they are a vital part of our heritage. We need logistical support to preserve these rock paintings, which number in the thousands,” said Nahid.

Some of the rock paintings date back to the eighth BC, cultural vestiges left behind by various civilizations that traded and traveled in the Indian subcontinent through the silk route.

The dam site has up to 30,000 of these ancient works. Nahid not only taps into these works to inspire her expression, she also builds awareness and seeks to promote their conservation.

“To achieve a similar effect as the rock paintings, I used a lot of layers,” explained Nahid, “like Lasani board layered over with powder pearl colors to get that grainy, vivid effect; lots of shining paints; super-imposed with prints; and sprayed with copper, silver and gold.”

Nomad Gallery Director Nageen Hyat said, “They really do evoke cave and rock art but there’s also something very impressionistic and post-modern about these works.”

“She’s also experimented with so many fantastic colors. I also get this sense of a symbolic femininity from them,” added Hyat.

Nahid worked hard to capture the grainy and unpretentious textures of ancient carvings and rock paintings. She claimed it was a challenging experience capturing the exact mood.

The earthy tones, vivid sea-blues and subtle figures have emerged effortlessly, despite the intense effort and study required to make them. Nahid worked on this series for almost a year and a half. The exhibition will continue till June 11.