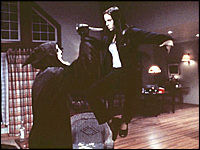 While the hit movie “Scream” cleverly made fun of the horror movie genre inside its storyline, “Scary Movie” just plain made fun of the slasher teen flicks with the outrageous humor of Shawn, Marlon and Keenan Ivory Wayans. Taking a page from the “Airplane” movies of the ’80s, “Scary Movie” turned up the heat a notch with outrageous sexuality, politically incorrect characterizations and rapid-fire jokes that never let you think too hard about what was going on.

A lot happened in the 20 years between “Airplane” and “Scary Movie,” and the innuendo and double entendres that made the Leslie Nielsen films so silly and so fun were almost quaint against the Wayans brothers’ take-no-prisoners satire in which nothing was sacred. The first “Scary Movie” took audiences by surprise with its freshness and audacity. But many people were also put off by the graphic sexual jokes.
“Scary Movie 2” was a lot less successful as it tried to recreate what made the first one such a hit.

Now, we have “Scary Movie 3,” and Zucker has breathed new life into the series by borrowing from his past with the wildly successful “Airplane!” In fact, he has even brought Leslie Nielsen into the fold to play the type of clueless, dimwitted character he does so well.

Only two members of the previous two “Scary Movies” remain for the third. The sweet, naive, but sexually adventurous heroine Cindy Campbell (Anna Faris), who is now a TV anchorwoman; and her best bud, Brenda Meeks (Regina Hall).
Three spooky horror films make up the intertwined story for “Scary Movie 3” — “The Ring,” “The Sixth Sense,” and “Signs.” There is also a little bit of Eminem’s movie, “8 Mile,” and “The Matrix,” thrown in for good measure.
Of course, the movie has to start off with some buxom babes who start to take their clothes off at any sign of danger. This time, the cameos are played by Jenny McCarthy and Pamela Anderson in full, clueless school-girl mode. In a takeoff on the opening of “The Ring,” the girls gossip about a cursed video. When people watch it, they get a phone call and then die seven days later.

The video soon becomes a curse to Cindy and Brenda. Cindy’s search for a way to break the curse brings her to the farmhouse of a former preacher (Charlie Sheen) and his accident-prone, rapper brother, George (Simon Rex, a pretty close match to Joaquin Phoenix of “Signs”).
If you have seen “Signs” and “The Ring” you should have a great time at “Scary Movie 3.” If not, you may just be befuddled, but at least you will laugh! Zucker has jettisoned the off-putting ejaculation jokes and has put more stress on surprise, performances and inspired editing that adds the comic timing so important to this kind of movie.

With a joke or a sight gag every 30 seconds, you will never have time to get bored, especially since the movie is only around 90 minutes long. So, if you don’t like one joke, just wait for the next.