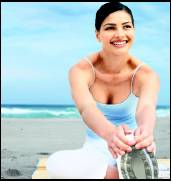 Overweight people eat more than thin people and are more likely to travel by car, making excess body weight doubly bad for the environment, according to a study by the London School of Hygiene & Tropical Medicine.
“When it comes to food consumption, moving about in a heavy body is like driving around in a gas guzzler,” and food production is a major source of greenhouse gases, researchers Phil Edwards and Ian Roberts wrote in their study, published in the International Journal of Epidemiology. “We need to be doing a lot more to reverse the global trend toward fatness, and recognize it as a key factor in the battle to reduce (carbon) emissions and slow climate change,” the British scientists said.
They estimated that each fat person is responsible for about one tonne of carbon dioxide emissions a year more on average than each thin person, adding up to an extra one billion tonnes of carbon dioxide a year in a population of one billion overweight people. The EU estimates each citizen accounts for 11 tonnes of greenhouse gas emissions a year.
Edwards and Roberts estimated that a lean population of one billion would emit 1,000 million tonnes less carbon dioxide equivalents per year compared to a fat one. In nearly every country, average body mass index (BMI) is rising, that is people are becoming fatter and heavier, said a London school release.
The most recent statistics from the Center for Disease Control indicate that 30 states in the US had populations in which more than a quarter of adults are obese.