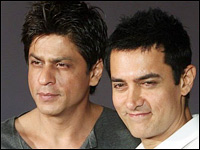 Recently, Shah Rukh Khan and Aamir Khan surprised everyone when they shared the dias and spoke at length about the ongoing multiplex issue. Channels and print media had a field day with their coverage of the rare union.

King Khan, known for scribe friendly quotes, was in his element. He said, “The re-union was not a patch up as there was no break up in the first place. If I were to patch up more with Aamir, we would end up getting married.”

Shah Rukh Khan revealed that were some issues between him and Aamir. “We have resolved them at a personal level and don’t need a media platform to sort it out. We do exchange SMSes and chat when we get time,” he said.