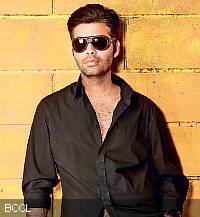 Karan Johar’s birthday bash at a hotel in central Mumbai is the talk of the town.

Not only did Karan manage to bring in the famous — Shah Rukh Khan with Gauri, Abhishek Bachchan with Aishwarya, Hrithik Roshan with Sussanne, Saif Ali Khan with Kareena Kapoor, Twinkle Khanna (minus Akshay), Ranbir Kapoor with Deepika Padukone, Imran Khan with Avantika Malik and the powerful — Tina Ambani and Parmeshwar Godrej amongst a bevy of other beauties and socialities, he also managed to make sure everyone at his party had a great time.

A guest says, “There was a lot of bonding happening; and rightly so. After all Karan’s party was the last major do for the summer of 2009. Next, he and Shah Rukh leave for the US to shoot My Name Is Khan. They’ll be gone for two months. That means Bollywood’s most influential folks will not get a chance to boogie-woogie and bond till August.