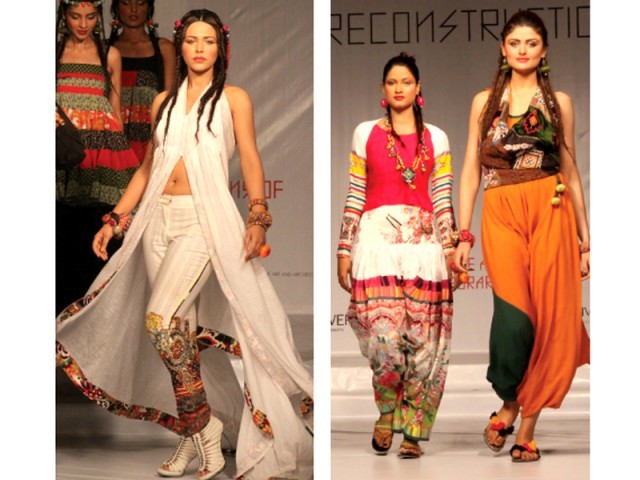 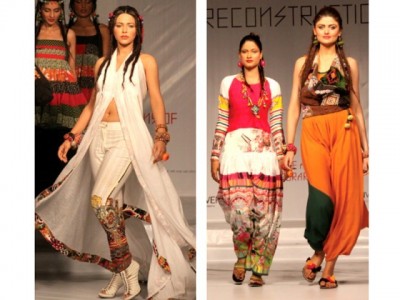 Reconstruction is as synonymous with fashion as smoke is with fire. Indeed, there can be no creation without an ingenious process of construction and reconstruction, of constant borrowing and building.

The most recent effort to create a cultural melange came from British Council, that has managed to bring British fashion to Pakistan with their project ‘Reconstruction: Cultural Heritage and the Making of Contemporary Fashion’.

The project’s opening night was held at the Indus Valley School of Art and Architecture (IVS) on March 10 and featured a cameo fashion show by FnkAsia, a retail brand that has spearheaded the inclusion of ethnic in fashion.

It’s so easy to discredit fashion as a highbrow element of our culture; one that we would like to believe exists at the fringes of society rather than existing as a force that can affect mainstream popular culture.

“There’s a lot of interest in what is happening here in Pakistan and several British journalists have visited the country specifically for the fashion weeks,” says Martin Fryer, the Director of Programmes at the British Council, whose larger interest in this project is to encourage young designers to draw on their own culture to create exciting fashion statements.

The choice of FnkAsia to represent Pakistan at the opening night with a flute player romancing the audience seemed like the perfect way to kick-start the exhibit that is due to run from March 11 to 16.

The fashion exhibit features some of British fashion’s most renowned and exciting names such as Vivienne Westwood and Paul Smith amongst a coterie of designers who form the Diaspora in Britain such as the Cypriot-born Hussein Chalayan, the Sacandanavian Peter Jensen, the Greek Sophia Kokosalaki and Osman Yousefzada of Afghan roots.

This traveling exhibition that began its journey from the UK and showcased in cities like Kazakistan, Bangladesh, now Pakistan en route to Russia, comes at a rather interesting time: a period of reconstruction of British society, where, in the aftermath of the London riots, the issues of identity and immigration have risen, contested and given new dynamics to contemporary art.