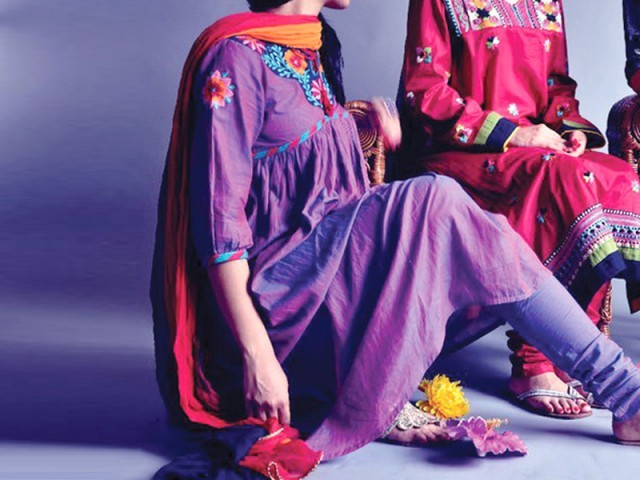 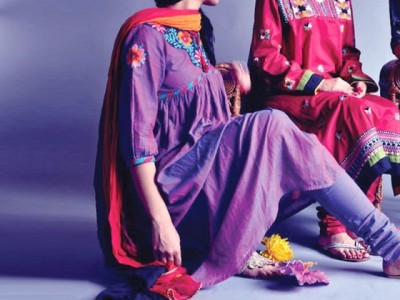 One thing is for sure, when you’re out Eid shopping, the best deals are not at your cool desi retail stores like Sheep, Ego, Daaman and Fnk Asia, but at the more older haunts like Generation and Cynosure.

While the list of former stores have changed the way we perceive ready-to-wear these days, and are a strong reflection of how women have come to dress in recent times, that is no dupattas and one pair of lowers paired with a motley of kameezes, they cannot truly design for an event like Eid without either diluting or making a mess of their own design philosophy. An important reason why these stores have not been able to succeed is because their focus has always been the urban working woman that is strictly a ruffle-free zone, the exact opposite of what an occasion like Eid demands — froth and frills.

Daaman, which prides itself on cuts and prints with a statement accent, does not offer much Eid-wise. But to give credit where it is due, it does not compromise on its usual aesthetics, but instead offers the same angharkhas and peshwases in cotton. A standout piece for instance, is a crushed fabric kameez with a full sleeved bolero. But again, this is just a shirt that will require one to hunt for a matching more formal dupatta and a pair of churidaars. Also, what gives Daaman its edge is how effortlessly it merges in a western sleeker silhouette in its attire so that it can easily be worn as a dress abroad.

Sheep has tried to add hints of silver, gold and diamantes on their otherwise sophisticated pastel palette apparel. The brand rose to fame because they catered to the woman who staunchly believed in ‘less is more’ and wore the most basic of apparels. However, this time around the brand has tried to mesh this ‘fuss-free’ woman with one with a proclivity for all things bling. In keeping with the trend of fitted tube sleeves for occasion wear, one of Sheep’s offering is a cotton chikan and chiffon angharkha. One could see expatriates, who typically fly in for occasions like Eids or relatives weddings, eye the collection appreciatively. A young woman at the store was heard encouraging her foreign counterpart to buy a piece, “Their stuff is very simple but very nice.”

Such a selection works brilliantly for those coming from abroad, having issues with the trying humidity and flashy and heavy clothing, as well as those who like a simpler look, but fail to make a mark as ‘Eid wear’ for the general populace residing in the country. Given that both stores have a price point averaging Rs3,500 for Sheep and Rs2,500 for Daaman for single shirts, the whole ensemble comes out to be rather expensive. Places like Cynosure in that respect, have stylish embellished clothing in light weight but semi-formal fabric averaging at Rs2,500 and Cotton Ginny between Rs3,000 and Rs4,000 for a three-piece suit. Even the time tested Generation — although slightly higher priced — proved to be a better buy at Rs5,000 for a semi-formal jora.

If one is willing to spend around Rs5,000-6,000 then Origins and Al-Karam Studio are worth a shot. For those who are designer conscious and are looking for clothes that can easily work for a family wedding need to be prepared to dish out around a steep Rs18,000 for a designer fashioned formal suit that can be procured from the leading fashion retail stores such as Labels, The Designers and Ensemble — that are blooming with Eid collections from local designers as well their own in house wares.