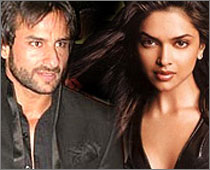 Every big Bollywood film’s release is awaited with bated breathe by the audiences. However, much before the film hits the screen, there is an equal amount of anxiety amongst us to find out what the film is going to look like.

We bring you an exclusive peek at the much awaited romantic film of this year – Love Aaj Kal. The film stars Saif Ali Khan and Deepika Padukone in lead roles and also features the highly talented Rishi Kapoor. Directed by Imtiaz Ali, this will be the filmmaker’s next release after the superhit Jab We Met.

Talking about the film, it is said that Love Aaj Kal will have a fresh take on relationships in a language that will appeal to everyone.

What makes Love Aaj Kal, even more special is that, it marks Saif’s venture into Film Production. The film is produced by Saif Ali Khan and Dinesh Vijan’s production house Illuminati films in association with Eros International.