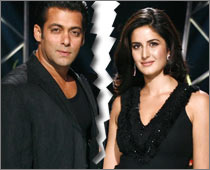 You thought that it was over between Kat and Sallu bhai, Noways! says this ‘it’ couple of Bollywood. But with recent bonding between John and Katrina and reports of Salman Khan throwing out Katrina’s stuff from his house made it quite obvious.

However, going by the statements that the couple is making, it seems all’s well in the Kat-Sallu paradise.

As per media reports, Katrina says “I’ve no idea where this story started from, Salman was very angry and he was ready to clear the air with the people who started it, but they didn’t come on the line. So obviously, someone’s up to mischief.”

So all you gossip mongers, leave Kat and Sallu alone!